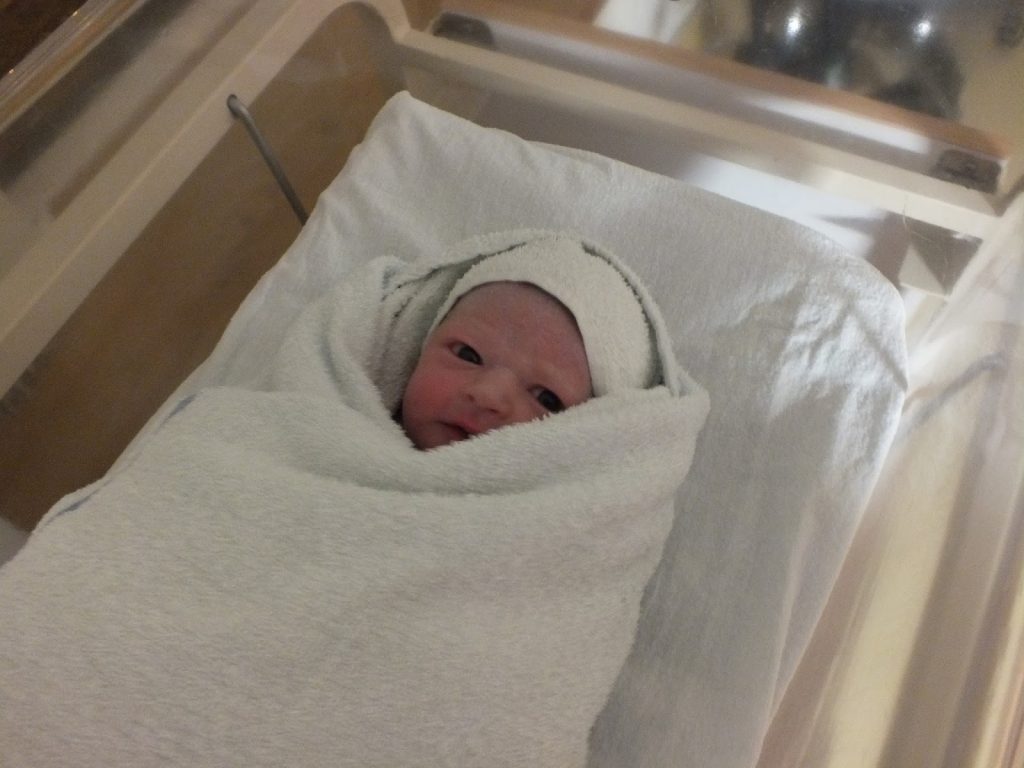 Dear Ollie
I sit here writing this on the eve of your 4th birthday. Tomorrow at 8.45pm you will be four whole years old. I wanted to celebrate your birthday this year by writing down your birth story. Although four years have passed I can blink and be back in the delivery room in an instant – as I can with your brother and sisters, but yours seems that much more prominent.
Ollie, you are my rainbow baby. You were born on 19th December 2012, 8 months and 18 days after your sister Sophie was born sleeping. My pregnancy with you was one of the things that stopped my world collapsing after losing her. I had a focus. I felt I had failed Sophie (although really through no fault of my own) and I wasn’t going to fail you, my Rainbow baby too. 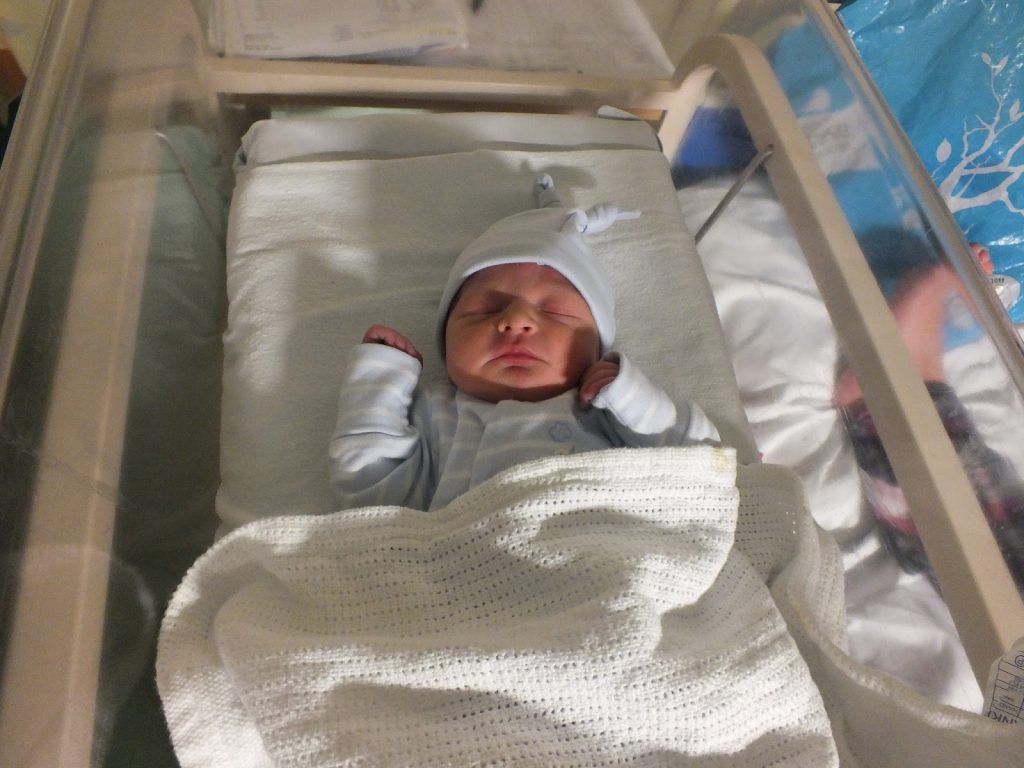 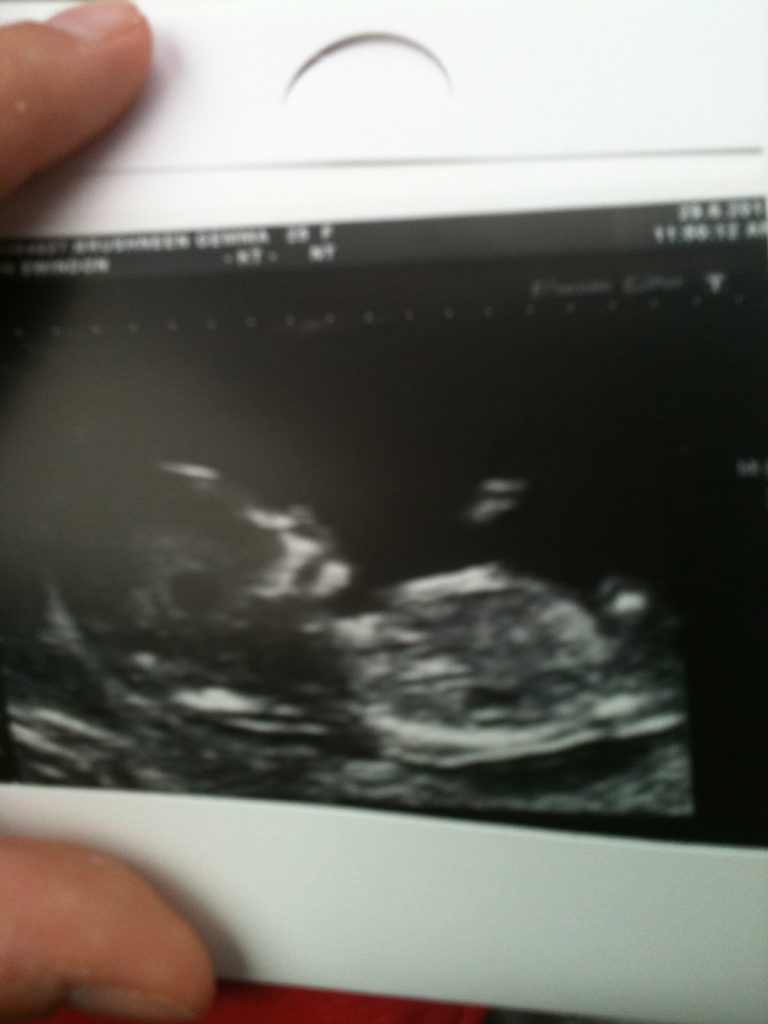 I found out I was pregnant with youon Friday 27th April 2012 and you were due on Thursday 3rd January 2013. In fairness, bar morning sickness that went on through most of my pregnancy, it was very straight forward up until around 34 weeks. My diabetes testhad come back negative so that was one less worry, and I had scans every month after I had passed the crucial 24 week point that we had lost Sophie. These scans checked your growth and you were on track all the way through.
At 34 weeks I started getting mild cramping pains on and off. The first few times I panicked and rang Daddy to come home thinking it was the start of labour. It didn’t progress into anything. This carried on right up until my induction date. The midwife suspected I may be in slow labour, but my waters were intact, and despite the contractions coming and going, everything else was ticking along nicely.
Your nursery had been painted and my hospital bag was packed. I was wary after last time, but I felt like I needed to be positive, and getting the nursery and your things all ready was my way of being determined I would bring you home safe and
well.
Izzie was excited to meet her you, and although we had both Nanny Jane and Nanny Dawn on high alert, the mild contractions continued to be just that – mild.
I was booked in for induction due to my history. Izzie was born late at 40+5 and weighed only 5lb 14oz and it was suspected my placenta had started to fail, and obviously we lost Sophie who had also stopped growing and passed away, so they didn’t want to risk me going to term this time, despite me taking baby aspirin throughout my pregnancy, to help avoid any possible issues.
My induction was booked for Wednesday 19th December 2012 when I would be 37+6. The consultant wanted me to be in before Christmas and so we were asked to get to the hospital for 10.30am on the 19th. The night before I had a nice bath with a Lush Sex Bomb bath bomb that Ruby bought me – apparently they help to bring on labour, but nothing happened.
Izzie went off happily with Nanny Jane and me and Daddy drove up to Great Western Hospital at Swindon. My induction with Izzie had gone on for two days so I wasn’t planning on meeting you anytime soon. I was nervous as my experience with Izzie of induction had been painful and long – although her delivery was super quick in the end.
We got booked in and put in a private room (the wards were all full) and got told a midwife would be around to see us and check me and you over.
The midwife came in around midday and hooked me up to the monitor which showed that you
were happy. She then told me she would have to do an internal to check my cervix and insert a pessary to start off the induction. (Sorry Mate if you are reading this a teenager – one day you’ll know all about it when you become a Daddy yourself!)
She gave me gas and air (I’m such a wuss) and I giggled my way though her poking around – always totally awkward having someone rummaging around down there, let’s face it.
After she had finished, she told me I was already 2cm dilated and as soon as they were able to get a bed on delivery, they would break my waters – no need for the pessary – yay!
The downside – delivery was packed and it could be up to a 48 hour wait for a bed. My heart sank – I was already upset about leaving Izzie and the thought of not seeing her for that long was awful.
Over the next few hours me and Daddy watched a bit of tv, napped and read some magazines. They brought round the dinner trolley – I remember some sort of hot pot and a bread roll and ice cream – good old hospital food! Daddy went off to the cafe to get himself a sandwich and a coffee – we all know much daddy loves his food!
A minute or so after he left, the midwife popped her head around the door and asked if I was ready – I thought she meant for tea and said I’d already had it – she looked at my bump confused!
She meant ready to go down to delivery – evidently someone was meant to pass on the message a bed was ready but they hadn’t! 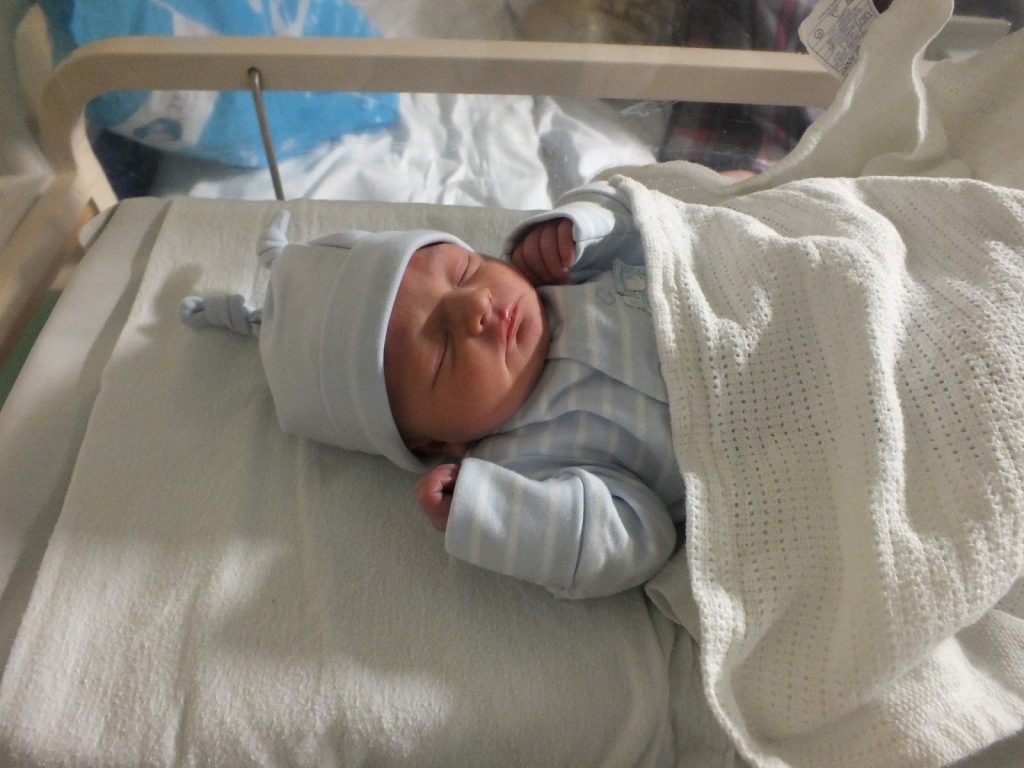 Daddy came back a few minutes later and we were both in a bit of shock as had been planning on hanging around a lot longer! I had a little cry then as I didn’t feel ready but then the adrenaline kicked in.
We wandered down to delivery where I was checked out again and my waters were broken at 6.50pm. Oh that feeling of it all gushing out of you – and the bed being all wet! Yuck.
My contractions came on immediately and within 10 minutes breathing through them was no longer helping. I asked the midwife for gas and air and she could see the contractions were coming every couple of minutes and let me have it. Every time I had a contraction I made a noise to let Daddy know one was starting – it sounded a bit like an alarm and I think Daddy and the midwife thought I was loopy!
At that point I pretty much stopped talking as the only way I could manage the pain was to revert into myself. I remember telling daddy he had to turn ‘bloody Adele’ off the radio as it was driving me insane. I remember him laughing at me and thinking I didn’t know, but I knew!  I also remember him keeping going out for coffee and it really winding me up.
At some point I remember saying I needed to push and when the midwife checked me she gave me the go ahead. I was in agony by this point and asked for pethidine as the gas and air was not taking the edge off at all. They administered the pethidine but by that point I was pushing and within a few minutes you were born.
They whisked you away and I remember asking why you weren’t crying? Then all of a sudden you let out a squawk and I knew you were fine. At that point the pethidine kicked in and I couldn’t feel my arms and legs. Daddy was amazing and was cuddling yo and got you dressed and gave you
your first bottle as I was totally out of it. I DID NOT like the pethidine and I would personally not have it again. Luckily I only had a slight tear on the scar tissue where I was cut with Izzie and so didn’t need any stitches.
Oliver George Brushneen, you weighed in at 6lb 8oz and had arrived at 8.45pm after a less than two hour labour. You was absolutely beautiful.
Daddy also had to help me to the loo and into the bath. He was as always so amazing – nothing fazes him. I’ve never loved your daddy more than in the moments after you Izzie, Sophie and Mason were born.
Around 11.30 we were transferred to the ward and once Daddy had got us settled he had to leave as it was late. I did have a bit of a breakdown as I had a moment of feeling like a new mum all over again and what the hell did I do with this little gorgeous bundle! Even though I was exhausted I spent most of the night staring at you Ollie – and changing those lovely meconium nappies! 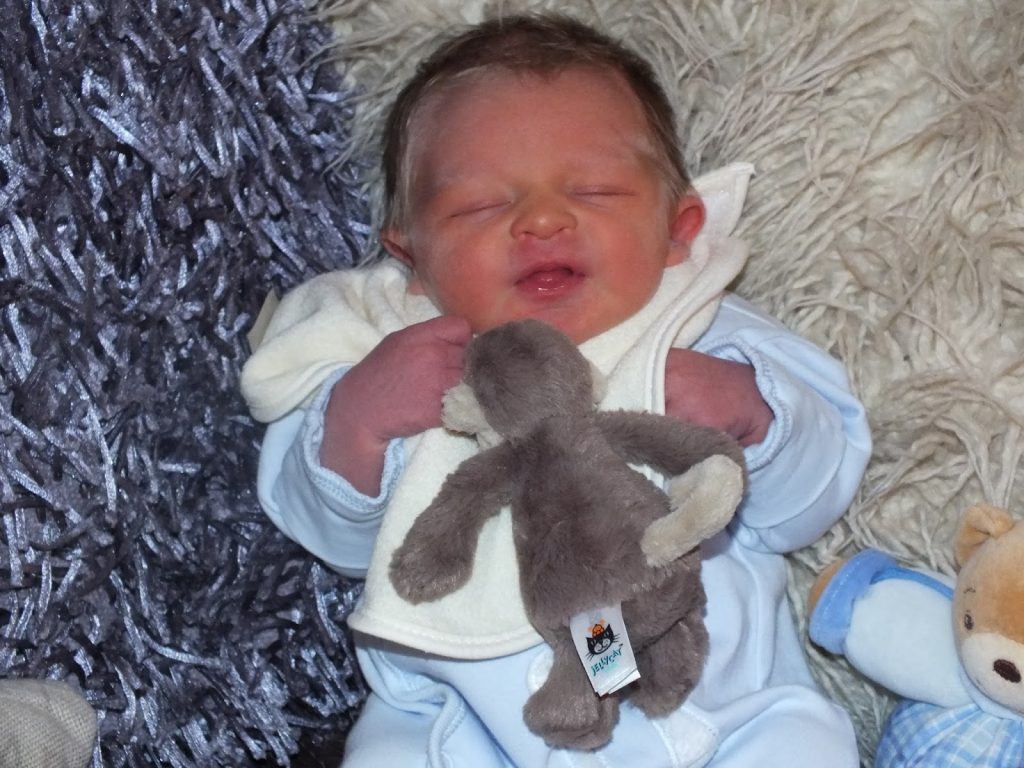 I was desperate to get home and back to Izzie and the hospital were more than happy to let us go after the paediatrician had checked you over and gave us the ok to leave.
We arrived home around 2pm on the Thursday and Nanny and Grampy brought Izzie home to meet her new brother. I love this photo of you both  – your first meeting. You may fight like cat and dog but I know you adore each other really. 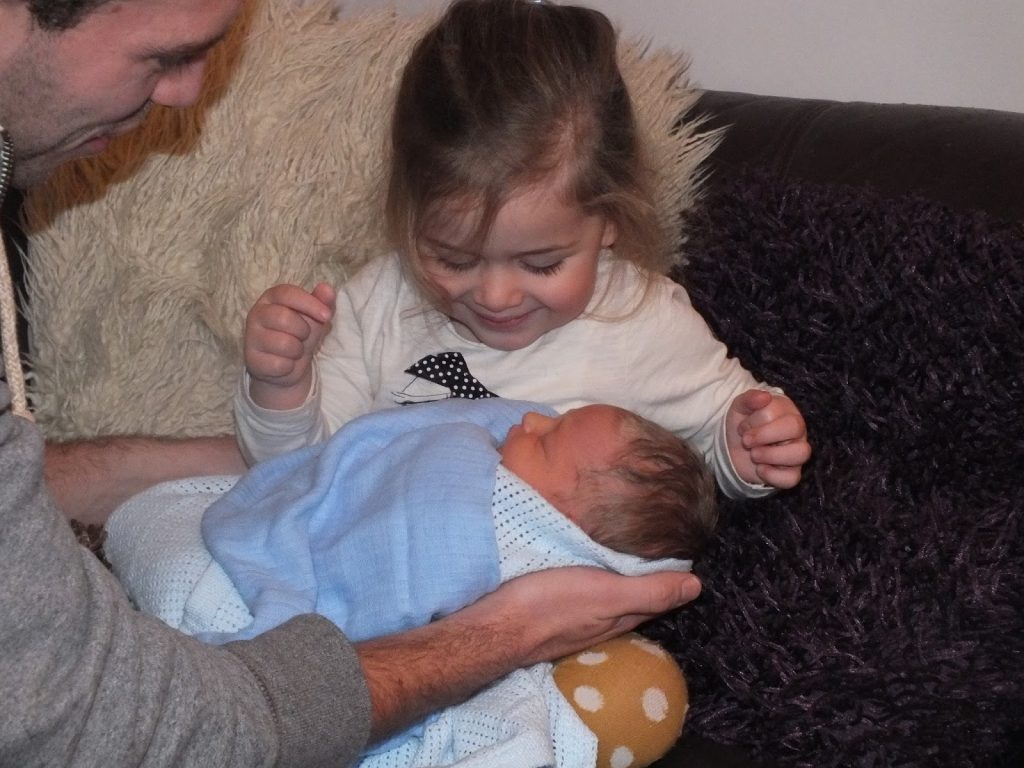 I’m sure I will add to this if I recall any other memories of your birth – I wanted to get it down as it will be amazing to read it when you are grown up and I am old!
Ollie, I really can’t believe you are 4 – you challenge me every day but you have brought so much sunshine into our lives, especially during such a dark time. Every day you amaze me with your humour and your cheeky smile and I’m so lucky and proud to be your mummy.
Lots of love on your 4th Birthday little man
Mummy xx 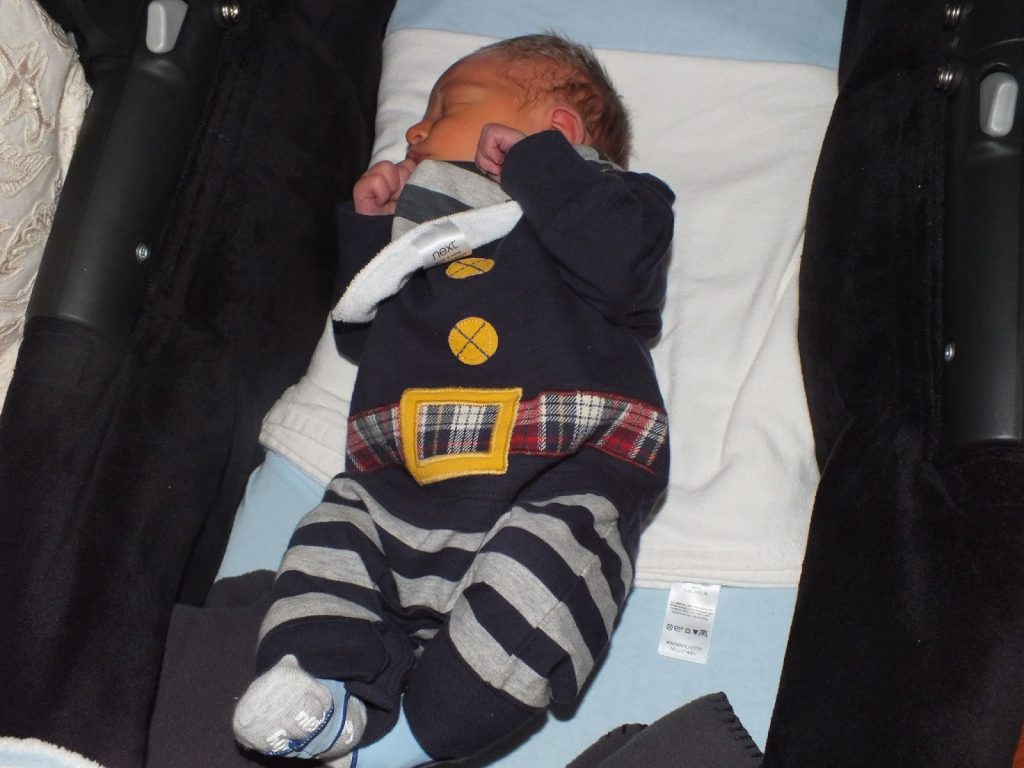 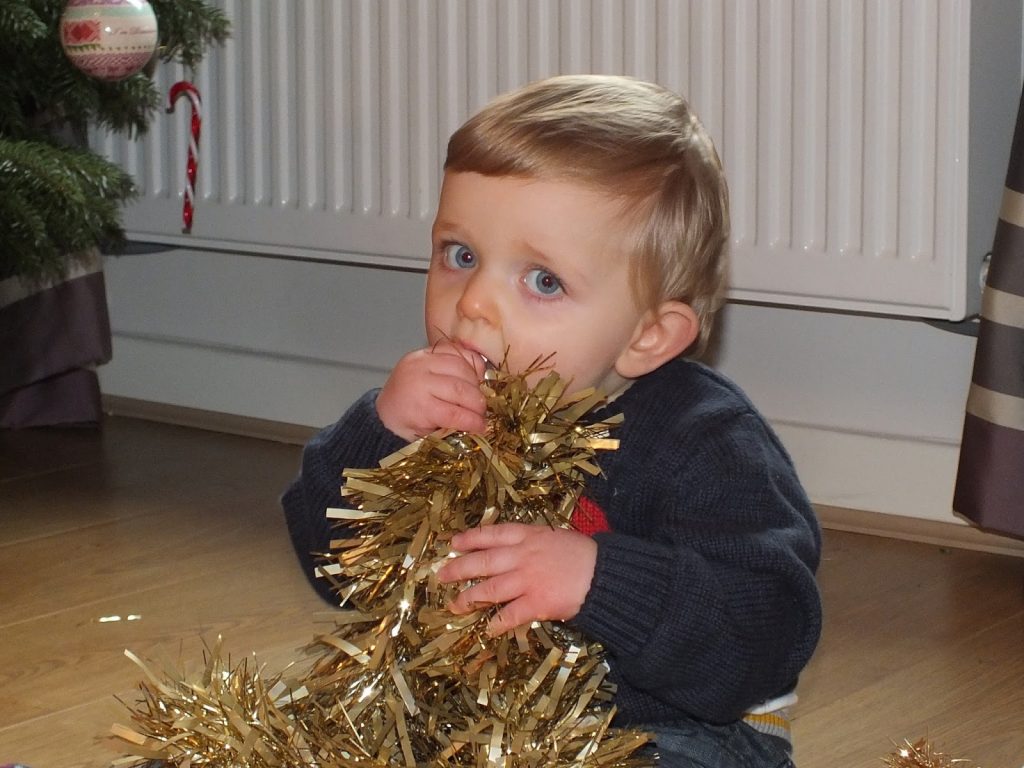 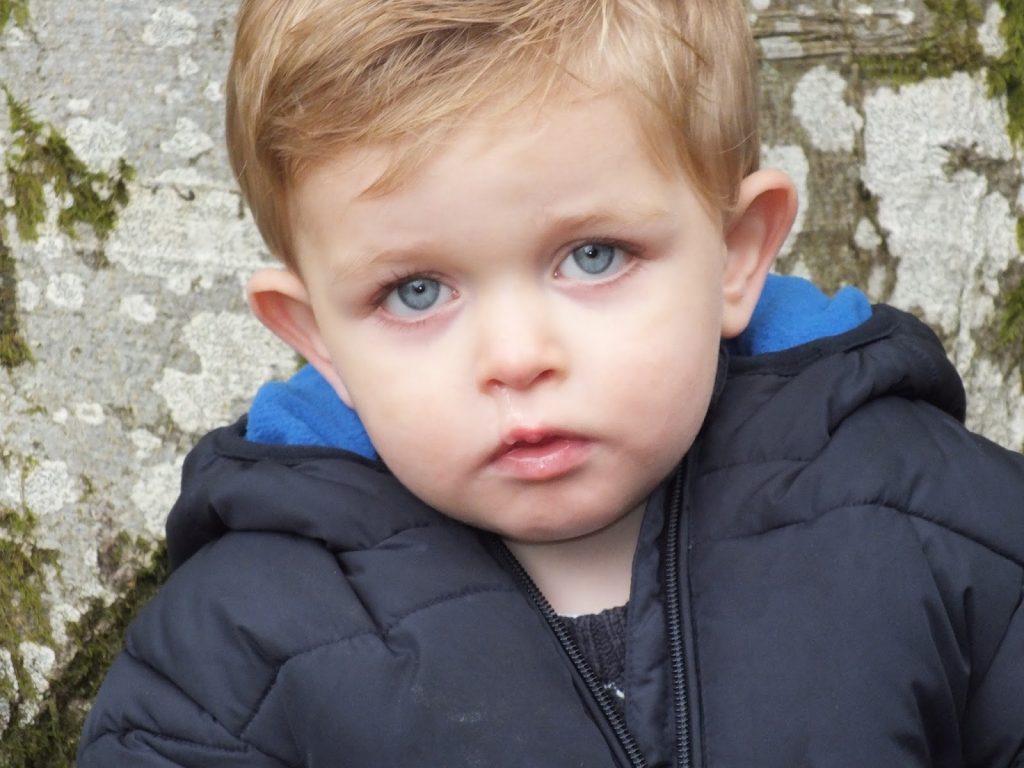 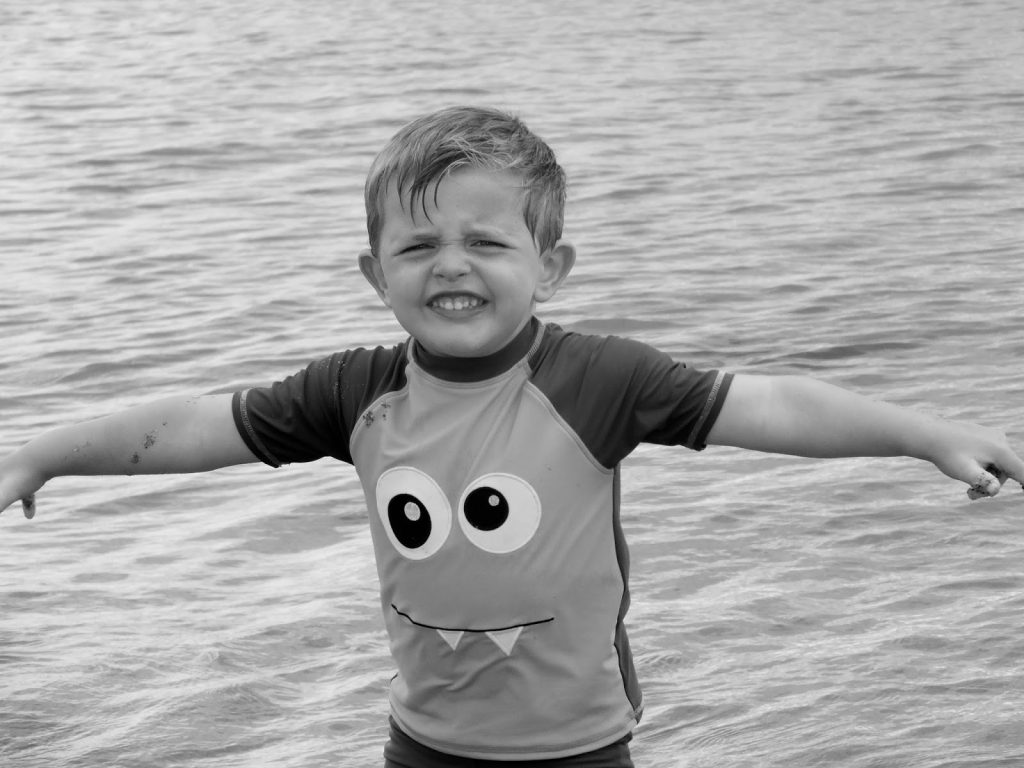 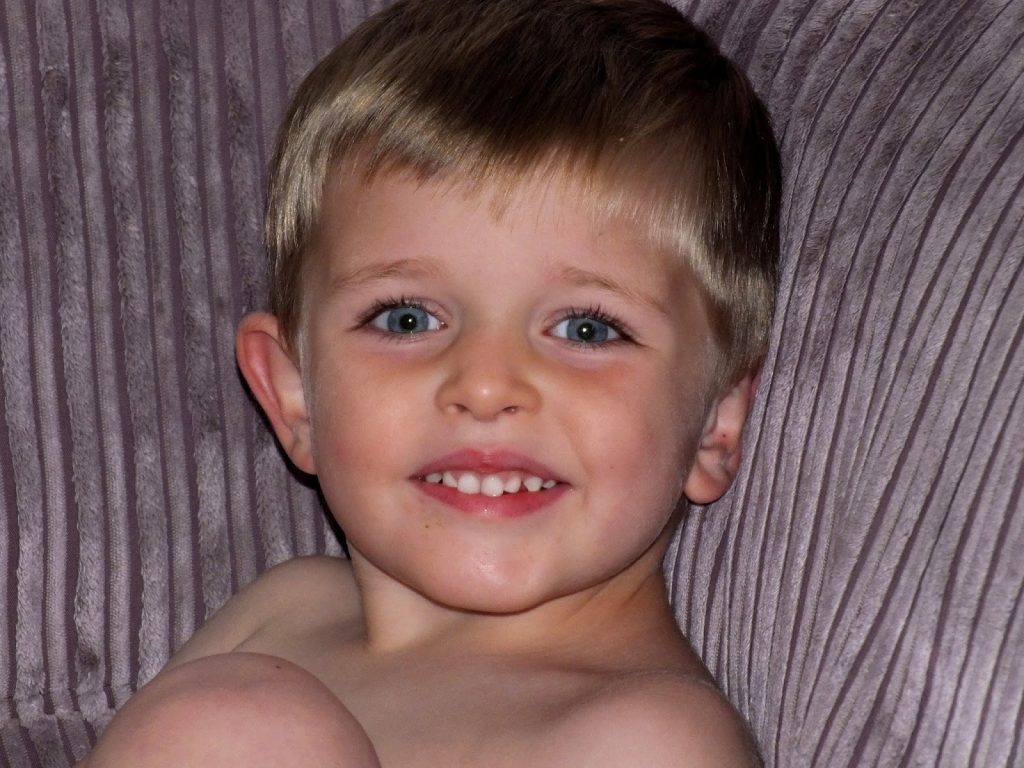