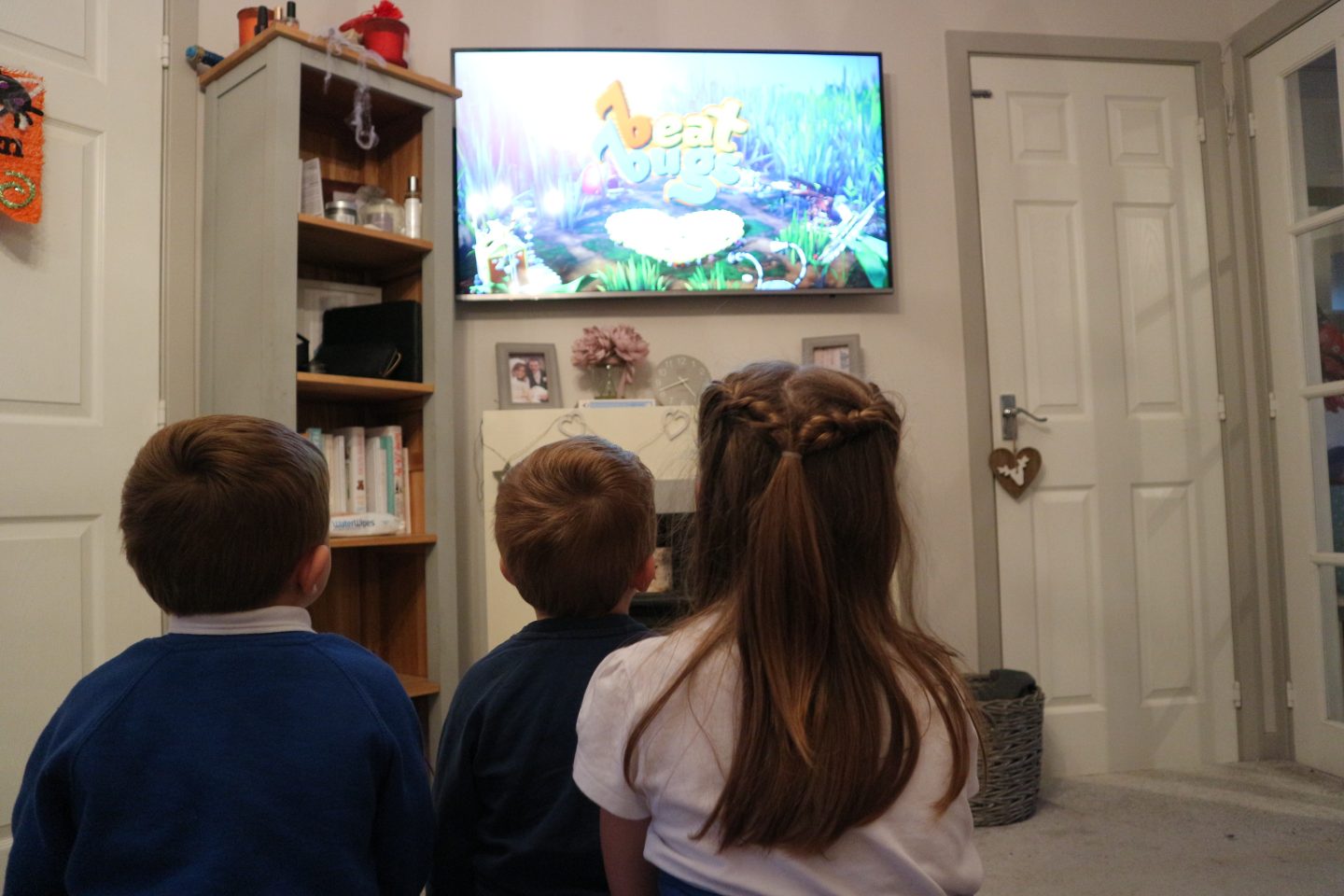 As a kid I used to cringe when I had a play date that involved my mum picking them up in the car. We were always subjected to listening to Classic Gold on MW – all songs from the sixties and seventies and I always thought my mum was totally embarrassing.

Unsurprisingly though it has given me a taste for a large range of music. I could probably sing the words to most songs from the sixties and seventies now. The eighties too.

I’m now that embarrassing Mum that makes her kids listen to the music from my childhood (hellloooo cheesy 90s pop), but luckily my kids obviously think I’m really cool (and I’ll keep telling myself that)!

I think it’s wonderful for kids to enjoy all types of music and enjoy music from years gone by, hence I was super excited when the kids came across Beats Bugs on Netflix over the half term holidays. 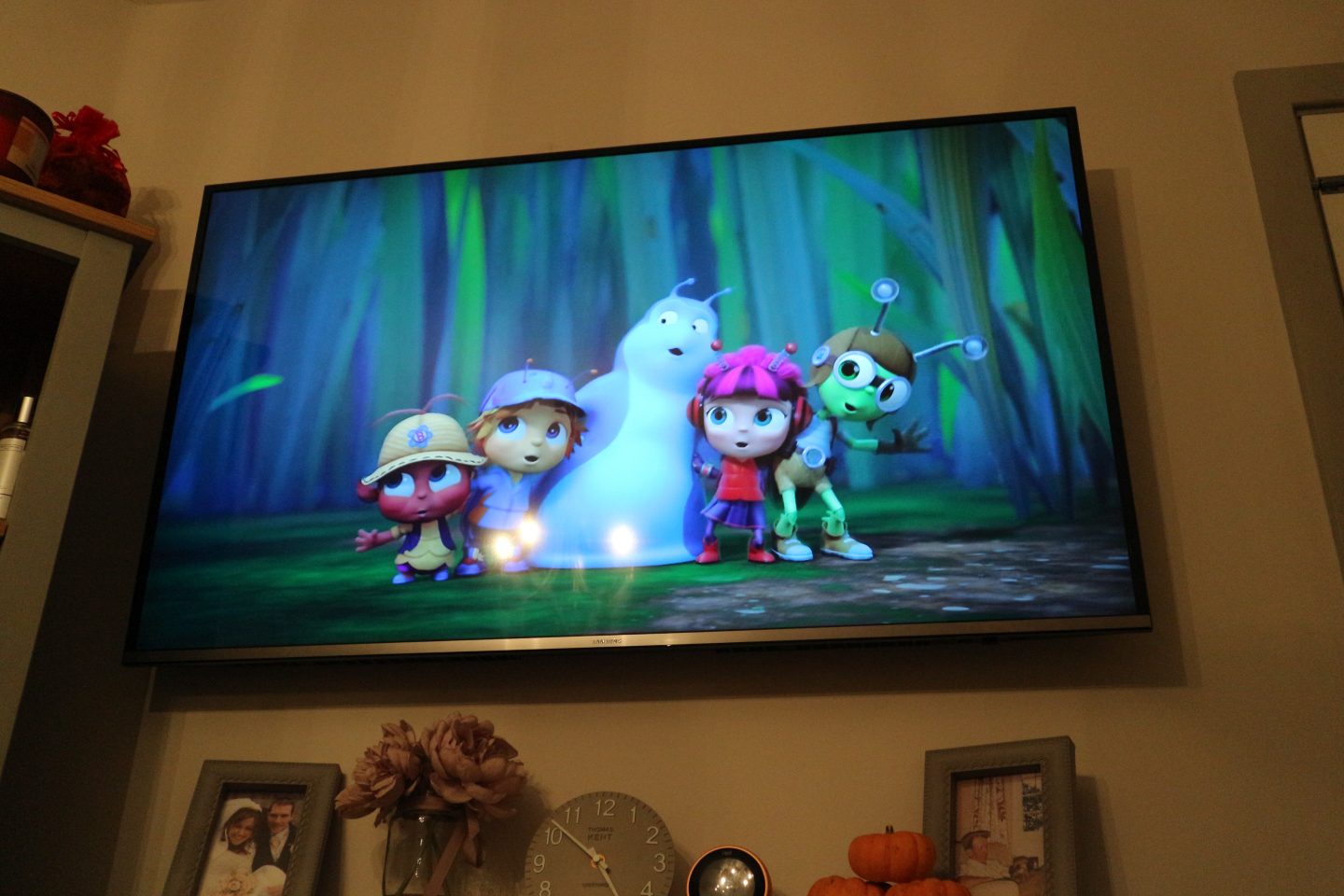 Beat Bugs is an Emmy nominated, animated, Netflix Original Series and features music by the most influential band in history, the wonderful Beatles. It was created by Josh Wakely and the storyline centres around five charming and funny child-like bugs who adventure together in an overgrown backyard. Each episode features a song made famous by the beatles, many voiced by celebrity guests who also double as one of the Beat Bugs’ adorable and eclectic friends. Season 1 of the show with its 52×11’ episodes instantly trended and feature such household names as James Corden, P!nk and Sia.

The kids have all been singing along and learning the words. Four year old Ollie’s favourite is ‘ALL YOU NEED IS LOVE BUM-BUH-DUH-DUH-DUHHHH’ and you can often hear him singing it and he doesn’t realise that he is. There are two series that are currently streaming on Netflix, and they have another series planned to air in Spring 2018.

The storylines are really watchable and relatable too, and as an adult familiar with songs by The Beatles, it is fun to sing along to. All three children love it and their ages range from Izzie who is 7, Ollie 4 and the youngest Mason is 2 and a half.

They were even more excited when they found out there is a huge range of Beat Bugs Toys that have launched exclusively at Tesco. We were kindly sent a few of the toys from the range and they were an instant hit with the little Brushneen’s. 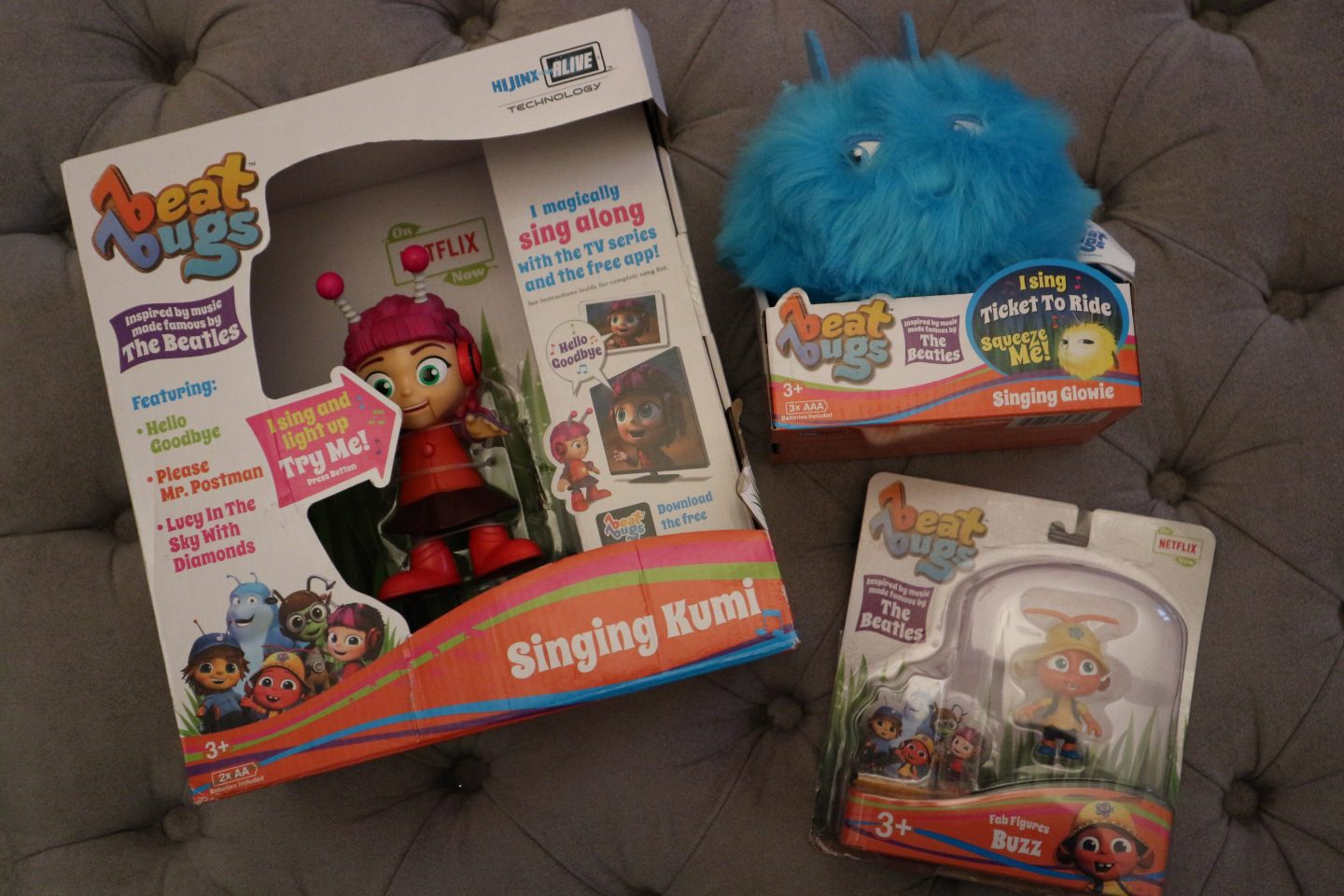 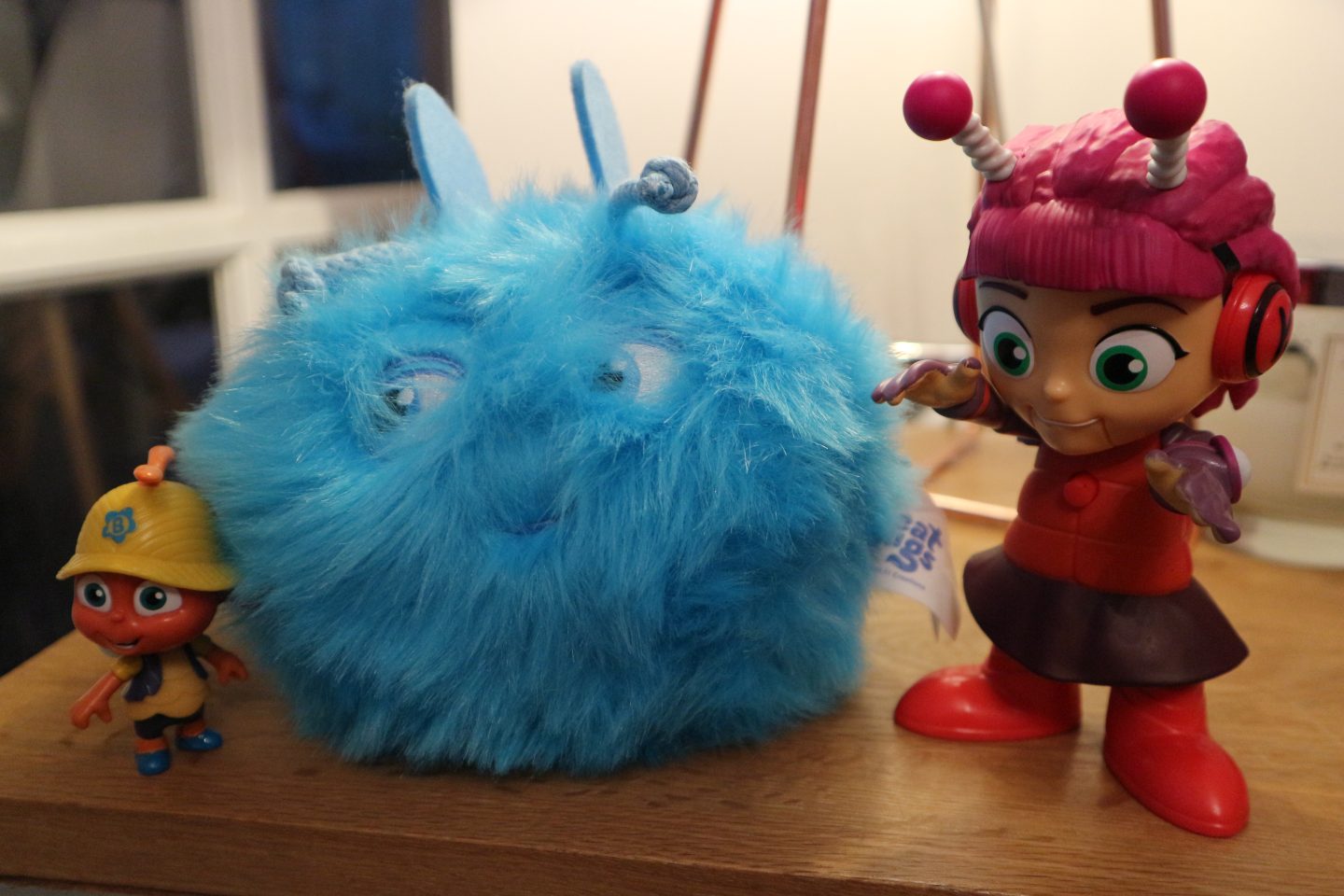 The first toy we received was The BeatBugs Singing Kumi  (RRP £29.95) – she is 6 inches tall and so clever. She interacts with season 1 of the tv show and also the Beat bugs App. As Kumi speaks or sings on the TV the toy lights up and the mouth moves.

You can collect all five of the main characters, Crick, Kumi, Walter, Jay and Buzz. When all five are together, they sing the theme tune ‘All You Need Is Love’. I was very lucky to see this in action at the Blog On Christmas Conference at the end of September and it is so cool. 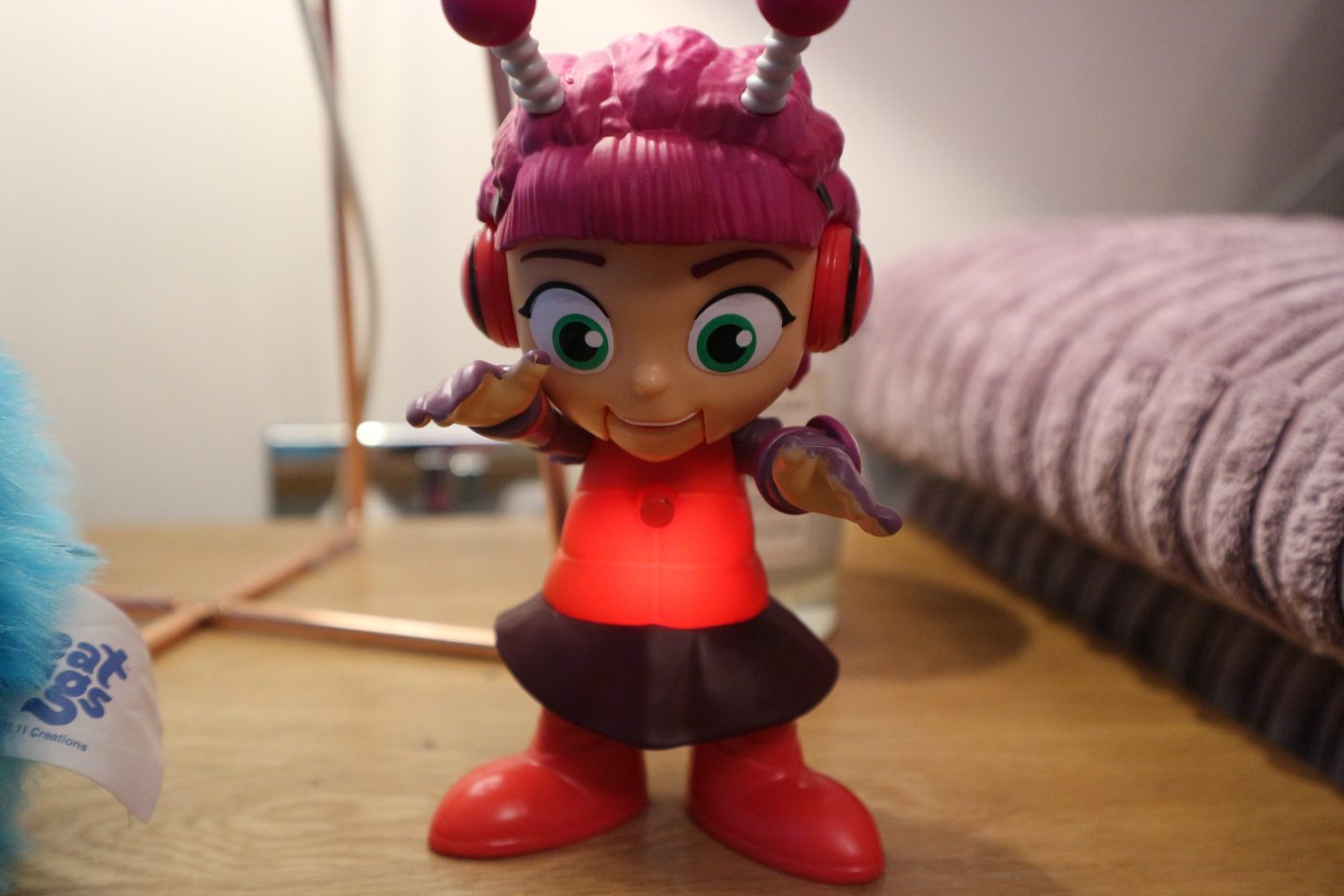 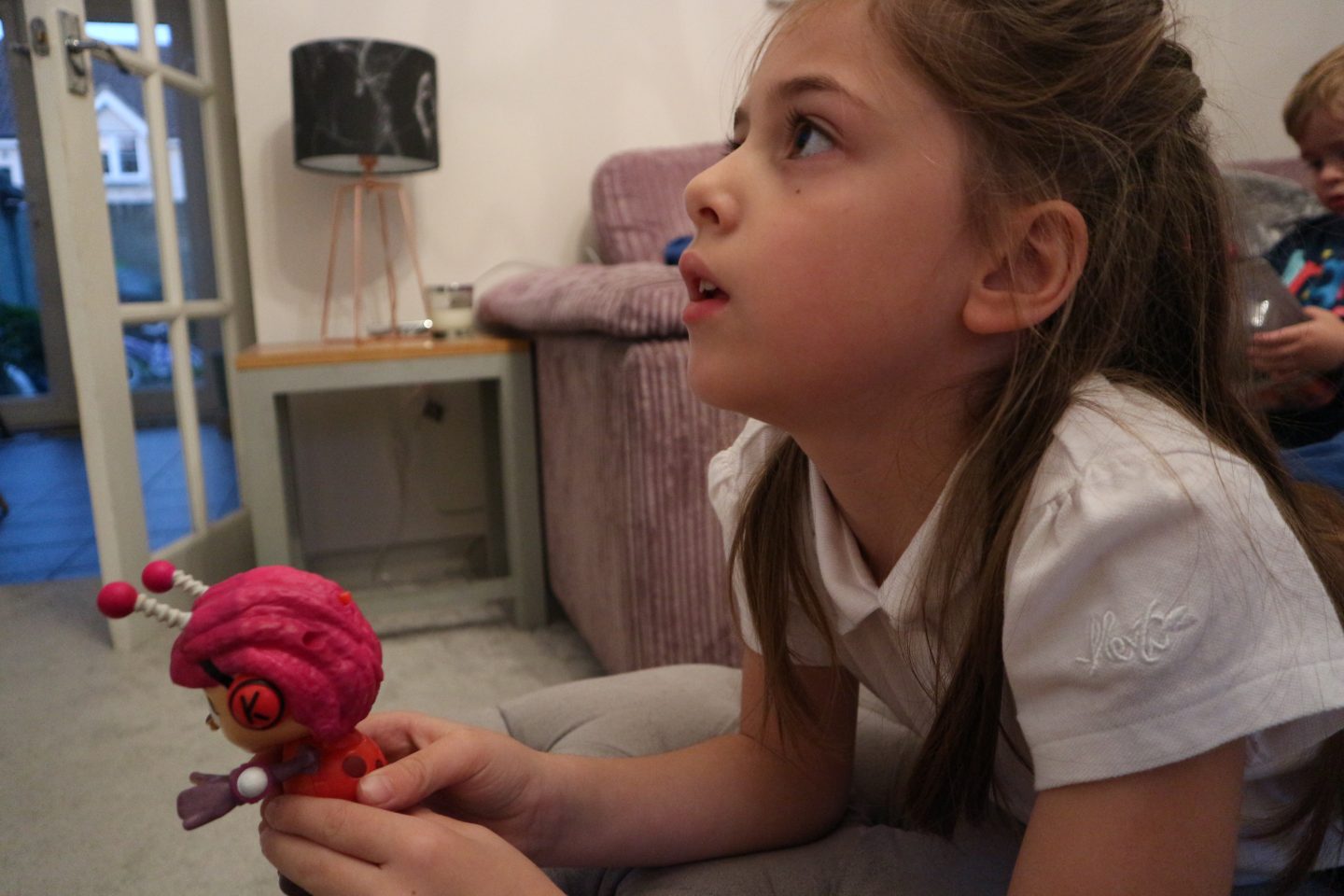 We also received a Singing Glowie (RRP £14.99), which Mason absolutely loved. They are super snuggly, there are four to collect and each one sings a different song from the show. We have the blue one, and it sings ‘Ticket to Ride’. The boys love it, and we’ve had a fair few fights over who takes it to bed. 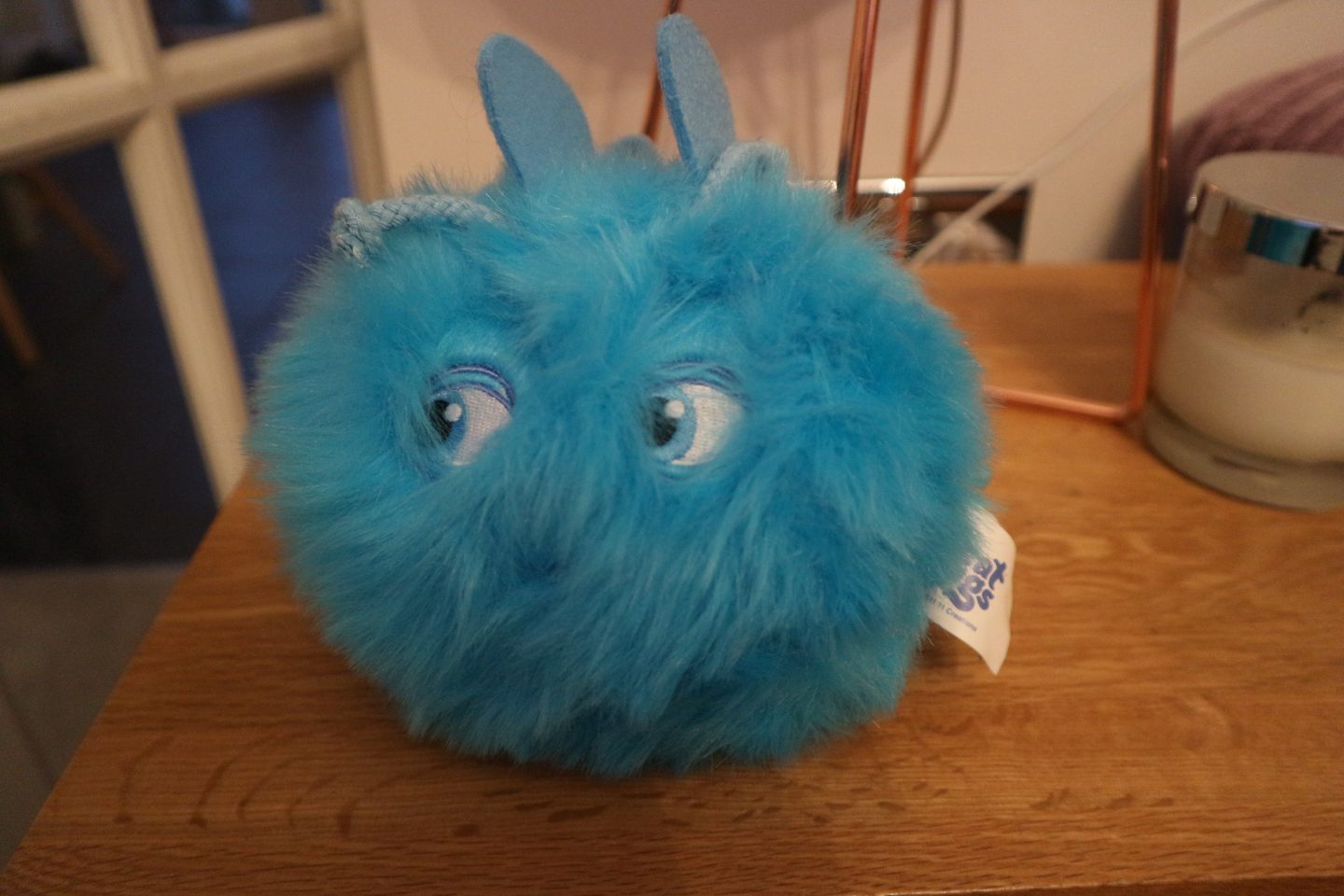 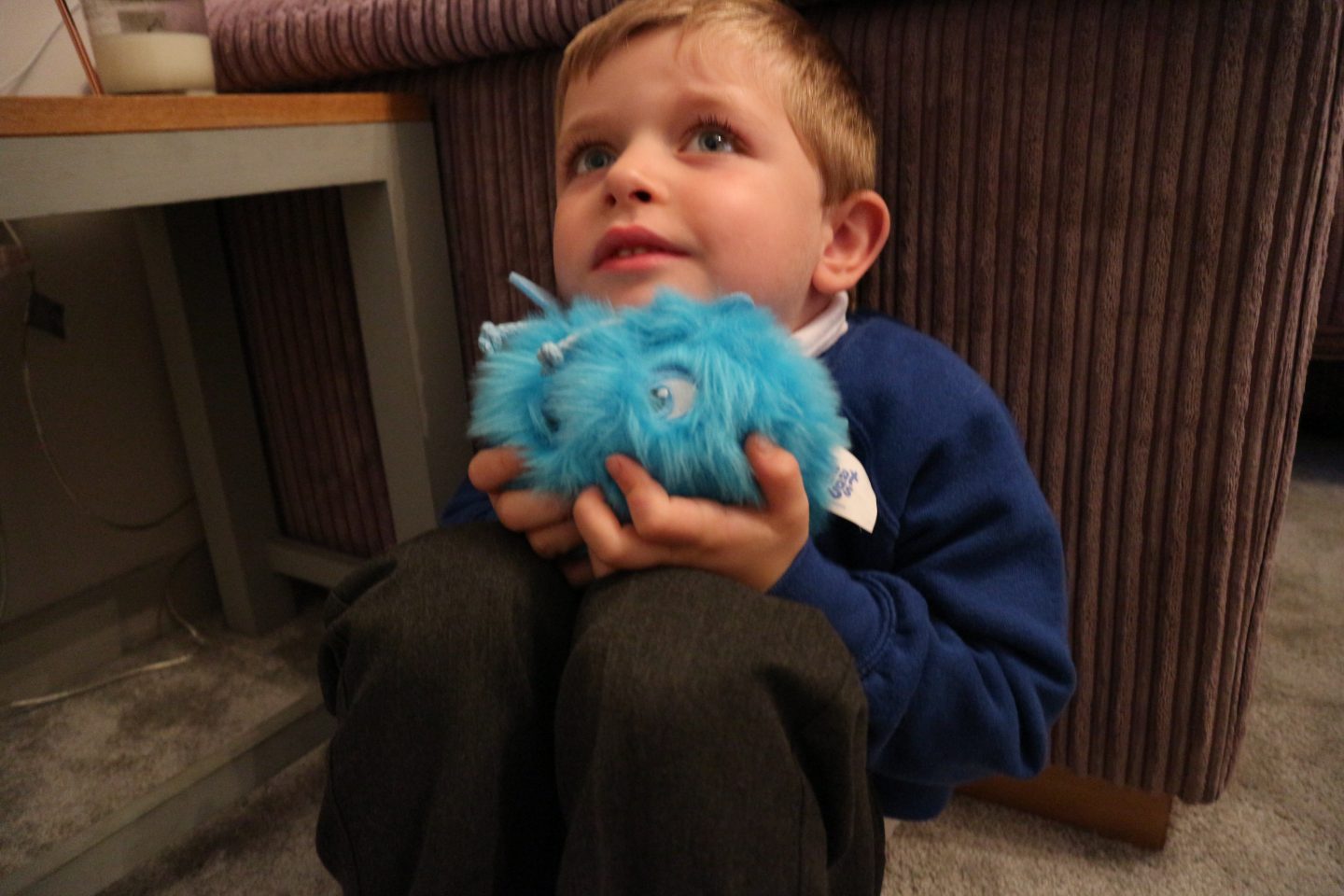 Finally we received one of the Buzz Beat Bugs Fab Figures (RRP £5.99). He is 3 inches tall, and perfect for story telling and creative play. Buzz has currently be involved in bath time, play doh and been taken in Masons pocket on the school run. There are seven different characters to collect. 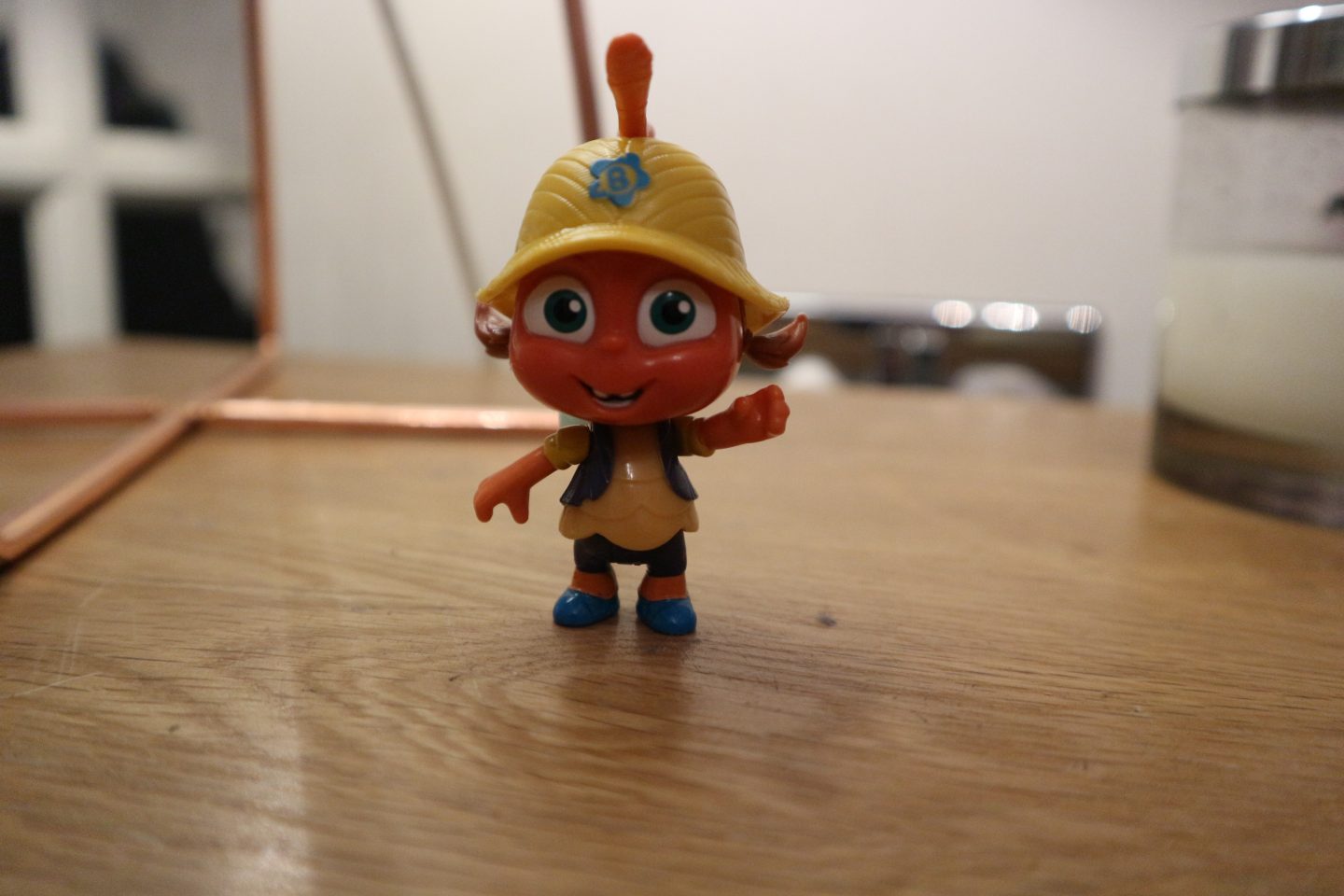 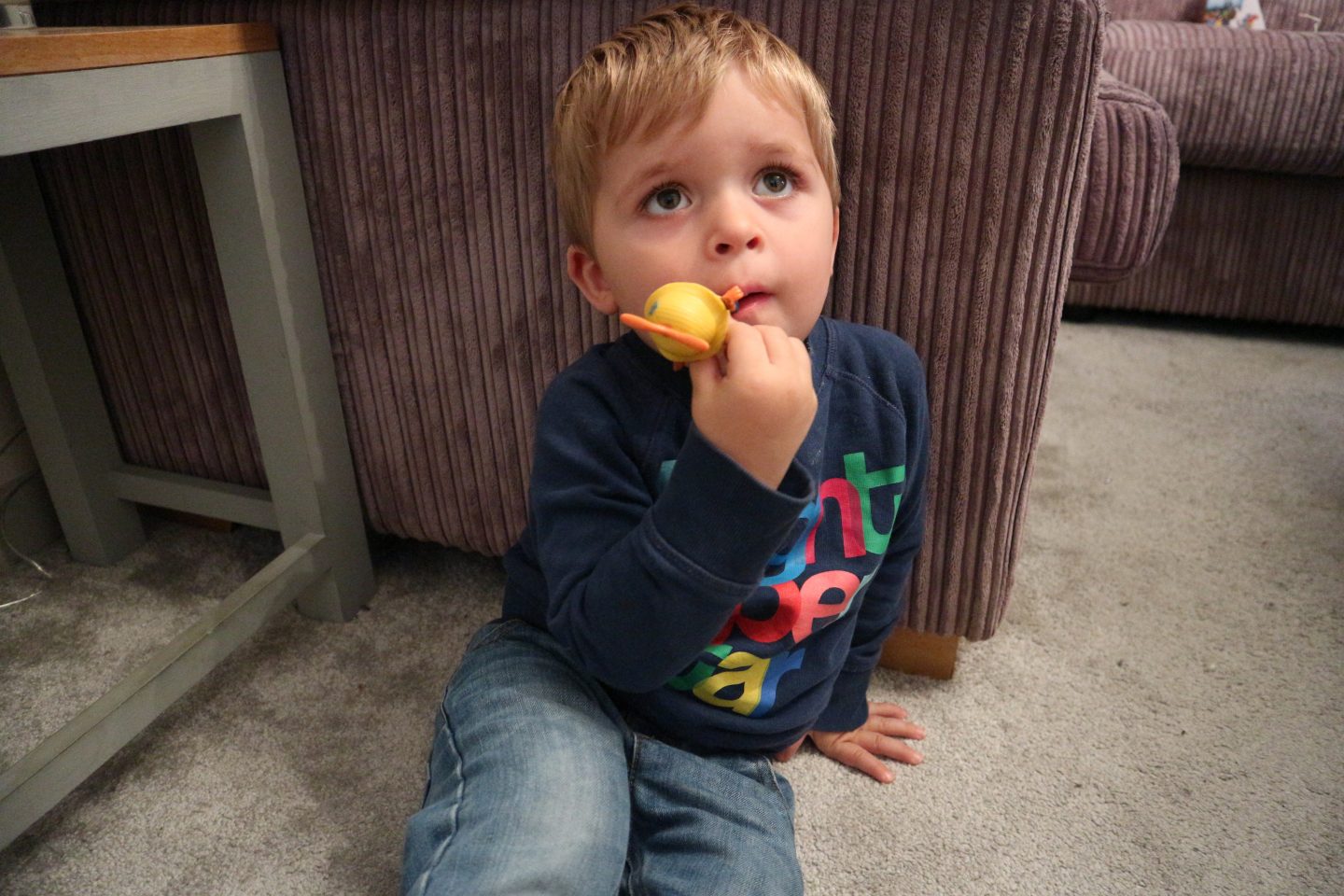 As a parent I loved the interactive toys, and actually didn’t find them too noisy, which is always a bonus!

The best bit was seeing the kids faces absolutely light up when Kumi started singing – it was priceless. As you can see from the photos, the kids couldn’t take their eyes off the show – they are transfixed by it.

I loved that each episode centres around a different Beatles song, and the storyline fits in with the song. Its very clever, and enjoyable for both children and parents alike.

Disclaimer: This is a collaborative post. We were kindly sent some of the Beat Bugs Toy range to review but all photographs and opinions are, as always our own.