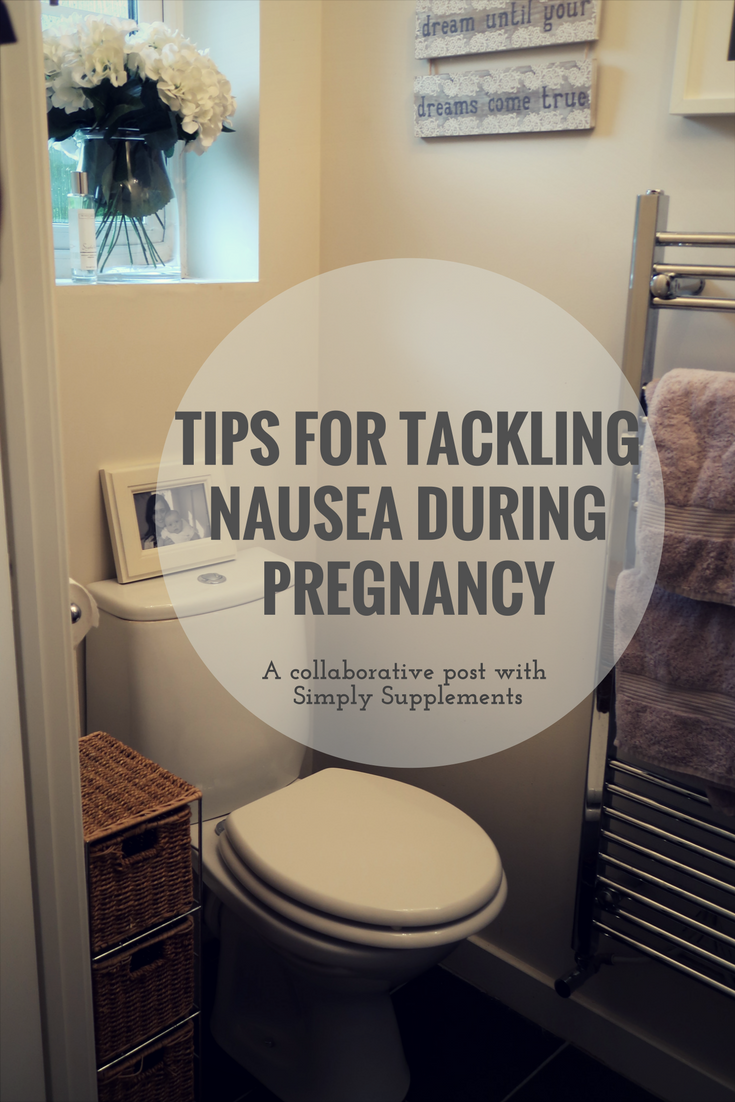 I know what you are thinking… she’s not pregnant? No I’m not (you can stop panicking now Ell). However during all my pregnancies, I suffered with the most horrendous morning sickness. I say morning sickness, I’m not sure who came up with that name – most likely someone who had never suffered from it. My sickness was all day and into the evenings – sometimes I would even wake up in the night feeling nauseous. It was always my first symptom of pregnancy too – I would start feeling nauseous before I’d been taken a test with all four of my pregnancies.

With Izzie, I literally threw up from four weeks pregnant, until about half an hour after I had had her. I lost a ton of weight as I couldn’t keep any food down, although ice cold water and full fat coke (I know, not ideal for a pregnant lady) did seem to help a little. Once I had to dash to the toilet in the middle of tesco  – and then I remember standing in the freezer section for ages afterwards as I felt so horrendous and cold air helped.

With Sophie, it was very similar, although not quite as severe, and the same with the boys. With Mason, Izzie had started school and those school runs killed me. I used to take a bag to be sick into, and once it took everything i had not to throw up in the hedge.

To this day, I can’t empty the bin without gagging – smells still really affect me.

The Duke and Duchess of Cambridge recently announced their third pregnancy, and poor Kate, bless her has really suffered. Its been widely publicised about her ‘morning sickness’, with plenty of people passing judgement. Everyone has their view on pregnancy nausea and sickness, and its one of those things you cannot pass judgment on as it is different for everyone. Kate has been diagnosed Hyperemesis Gravidarum, which is a severe condition in pregnancy, causing severe nausea, sickness, dehydration and weight loss. I was very close to being hospitalised with Izzie but managed to avoid it. I felt desperate, and so I can’t begin to imagine how people with HG feel.

I did however come to see my pregnancy sickness as a positive sign – in my mind it meant my baby was growing and my body (and hormones) were doing all the right things.

If you are reading this because you are currently suffering, I wish you lots of love and luck with your pregnancy – a top tip from me is to make sure you always keep the loo clean, at least its more pleasant to throw up into then! Of course there are way more helpful tips than that, and with this in mind, I was pleased to collaborate on this post with Simply Supplements, whose experts have kindly put together some useful information and tips for anyone who is suffering from nausea and sickness in their pregnancy, with some tips on things that may help you….

Tips for Tackling Nausea During Pregnancy

It is difficult to exaggerate the potential impact of nausea and vomiting during pregnancy.

Whilst the current evidence doesn’t seem to suggest that feelings of nausea necessarily pose any physical risk to you or your baby, it can have other impacts on your life. Surveys of pregnant women have found that regular bouts of sickness lead to what one study called a “profound impact” both on general outlook and on women’s ability to carry out everyday tasks. As a result, it can become thoroughly debilitating for more seriously-affected women.

How Common is Pregnancy-Related Nausea?

A study of 239 pregnant women in the USA asked them to report regularly on bouts of sickness. The scientists found that whilst feelings of nausea in the first trimester were most common,  and were suffered by almost 21% of women, these feelings often persisted and were frequently experienced throughout pregnancy. An unfortunate 17.6% of the women questioned experienced the same discomfort throughout both their second and third trimesters.

Another study yet found that 66% of women complained of nausea during their first trimester, with only a quarter of participants finding that symptoms went away by the 3-month mark. They also found that women who suffered from feelings of nausea before pregnancy, such as when taking oral contraceptives, were more likely to suffer in pregnancy.

These findings are actually quite low when compared to other studies. In another involving 948 pregnancies, 70% of women reported feelings of nausea at one time or another. 52% of participants “always” experienced nausea. It has been suggested that roughly half of women experiencing pregnancy-related nausea will also suffer from physical vomiting.

This wealth of data tells us a number of things. Firstly, pregnancy-related nausea is far more common than many of us might have thought. In other words, while bouts of nausea or sickness during pregnancy might not be pleasant, they are most certainly normal and natural.

Secondly, whilst such feelings are most prevalent in the early days of pregnancy, in a huge number of cases these symptoms can persist throughout pregnancy. Just because your friend’s sickness went away after a few months doesn’t necessarily mean your experience will be the same. Furthermore, prolonged nausea isn’t necessarily a cause for concern.

Causes of Nausea in Pregnancy

Oddly, for something as common as pregnancy nausea, scientists are far from agreed over its causes. Whilst it seems likely that it is a response to changing hormone levels in the body, several schools of thought persist as to why this may be occurring.

One of the most popular theories suggests that nausea and vomiting are a powerful way to protect both mother and baby from microorganisms present in food. This, in turn, is designed to keep you both in the best possible health.

In brief, it seems possible that your body may simply be upping the “danger signals”, and that vomiting is one way to expel potentially harmful substances from the body. In other words, nausea and vomiting, while unpleasant, are a natural and normal part of pregnancy for the vast majority of women.

Feelings of nausea are far from pleasant, but somewhat surprisingly there is some evidence that they may actually be a good sign.

Studies have found that feelings of sickness or even physical vomiting may actually indicate more positive pregnancy outcomes. One detailed analysis, which looked at reams of previous research on the subject, concluded that there is a “significant association” between feelings of nausea in pregnancy and a “decreased risk of miscarriage”.

In a separate study of almost 1000 pregnant women, scientists found no correlation between feelings of nausea and any potential “pregnancy complications”.

While feeling grateful for your nausea may therefore be a step too far, it seems there may be a silver lining to your discomfort. Far from suggesting problems, nausea during pregnancy may actually be quite a good sign that everything is developing just as it should.

So far, then, we have observed that nausea and sickness in pregnancy in normal and commonplace, and is unlikely to represent any physical problems. All the same, we know how unpleasant the experience can be. So what can be done to help reduce feelings of nausea?

Ginger has long been used as a traditional herbal remedy for calming the stomach, but a number of studies suggest that it may also help with nausea during pregnancy. In one study, 67 women complaining of nausea during pregnancy were provided with 250 mg of ginger per day. The findings suggested that women taking the ginger supplement not only saw an improvement in how often they experienced feelings of nausea but also vomiting too. As the experts concluded, ginger “can be suggested by care providers as a means of decreasing pregnancy nausea and vomiting”.

In another study, 70 pregnant women suffering from nausea were provided either with 1 g of ginger per day or a “placebo” that had no effect. At the end of the five month experiment, similar results to the previous study were discovered. In brief, the experts noted that even this small volume of ginger seemed to result in fewer episodes of vomiting and a significant decrease in the experience of nausea.

Vitamin B6, sometimes known as pyridoxine, also seems to offer some protection against the symptoms of pregnancy nausea. One Australian trial provided pregnant women either with 1 gram of ginger or 75 mg of vitamin B6 per day. After three weeks of treatment the experts found that both supplements helped to reduce nausea, and that furthermore the impacts of each were identical.

Other studies have similarly found that “the nausea score and the number of vomiting episodes were significantly reduced following ginger and vitamin B6 therapy”.

At the same time, vitamin B6 does not necessarily need to be taken alongside ginger. Studies on the impacts of vitamin B6 alone have also shown a positive trend. In one study pregnant mothers were provided with 25 mg of vitamin B6 every 8 hours. They found that number participants experiencing vomiting “were significantly reduced” following supplementation.

Whilst the science behind the use of acupressure as a treatment for nausea is less well-researched, there is some evidence to suggest that it may help. Scientists divided 60 pregnant mums into two groups, then taught them acupressure. One half was taught to put pressure on a well-known point known as “PC-6” whilst the others were advised to apply pressure to a “placebo point”.

Participants were asked to apply pressure to their assigned point four times a day, for ten minutes at a time. The results of the experiment suggest that acupressure at the PC-6 area was effective in reducing the symptoms of nausea, but not the frequency of vomiting in pregnant women.

Listen to Your Body

We’ve all heard of women’s food tastes changing during pregnancy. Whilst it doesn’t seem to affect all women, some people find that previously popular foods have now lost their appeal, or they may even develop a desire for “unusual” foods. There is some evidence to suggest that feelings of nausea may be linked to changes in the desirability of certain foods, as the two often arise very closely to one another during pregnancy.

It therefore makes sense to pay more attention to your body when you’re pregnant. If certain foods start to repulse you then discuss omitting them from your diet with your healthcare professional.

At the same time, try to pay attention to whether your sickness seems to come about after eating certain foods. Keeping a food journal can help to identify any foods that may be causing you problems.

Whilst sometimes finding the strength to head down to the doctors surgery or hospital can be difficult, any changes to your diet or lifestyle should be “approved” by a qualified professional.

There are also a number of prescription drugs which have proven to be safe when pregnant, and can help to reduce the symptoms in many women. Speaking to your health professional is therefore a critical first step in resolving persistent feelings of nausea during pregnancy.

In conclusion, the good news is that there are a host of possible solutions for nausea during pregnancy. If you find – like many other women – that your feelings of sickness are having a negative impact on your lifestyle then it is wise to seek the help that you need.

While your nausea may not clear up completely, there are a range of potentially-beneficial treatments which may improve your symptoms when approved by your healthcare professional.

Disclaimer: This article was written in collaboration with Simply Supplements, one of the UK’s biggest retailers of health supplements. You can learn more about their supplements here.