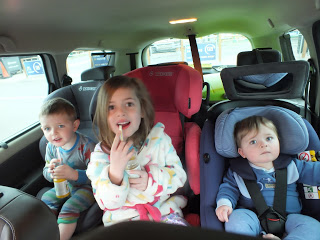 We went on our third trip to Disneyland Paris on Monday 21st March 2016.
*A bit of backstory – I had never been as  child, so in 2007 Ell took me for the first time. I tend to get homesick on holiday, but this was the first time I had been somewhere I didn’t want to leave. I really thought I couldn’t love somewhere more – until October 2013 when we took Izzie and Ollie for the first time. Seeing your children’s eyes light up at the sheer magic when you walk through the park gates is one of the best feelings ever. Izzie was 3 and Ollie was 10 months and the both LOVED IT, so much so that Izzie constantly asked when we were going back.

I decided I wanted Mason to be a similar age when we went again (at 10 months he wasn’t having so many bottles/formula, but was still eating food that we could travel with (Ella’s Kitchen). He was also very happy to sit in a pushchair or go in the sling. Perfect age for a first visit. Ollie was three, he didn’t remember anything from last time, bar what he had seen in our photos. Izzie just couldn’t wait to go again. We managed to get a good deal when disneylandparis.co.uk had an offer on (I think it was book for three nights and get an extra night free) and we added on a half board plus meal plan – I’m planning to write a post with my top tips so will link it when it is done.*

So….back to 21st March 2016, we decided to use the Eurostar again, which we caught from Ashford, Kent. It is a slightly longer drive than it would be for us to London Waterloo (3 and bit hours) but you have a shorter journey on the train, and we figured it was easier to keep the kids still in the car, strapped in their seats, rather than on the train.
We got to Ashford in plenty of time to enjoy a McDonalds Breakfast in the car in their PJs- a Brushneen holiday tradition. (Mason’s car seat was rotated so we could feed him, and switched back to rear facing straight away afterwards btw)

McDonalds Pancakes for the win!

Ashford station is great – they have lots of Disney characters dotted around as soon as you leave the multi storey, so the kids were immediately even more excited. The check in was easy (having to collapse the double buggy was the worst part) and then we got to hang out in the waiting area until the train was called. We had to check in and get our park tickets, half board vouchers and luggage labels for Disney Express (more about this later) which was easy enough. I do find Eurostar slightly stressful for one reason – you have to carry all your luggage and load it on to and off of the train yourself. For this reason we managed to get 5 peoples things including nappies for 2, pre made formula, baby food, toiletries and clothes into 3 cases. Packing for March weather was interesting as we had to have coats and plenty of layers due to it being warmish in the day and freezing at night! Getting down the escalator to the train was fun! 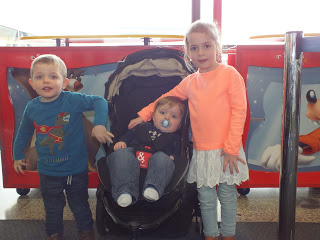 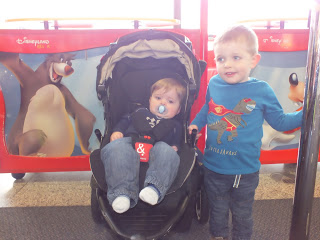 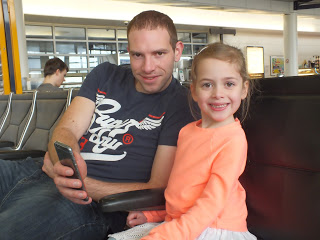 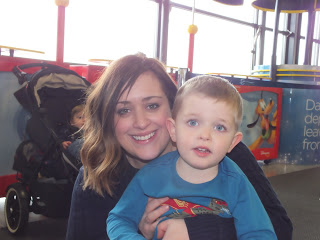 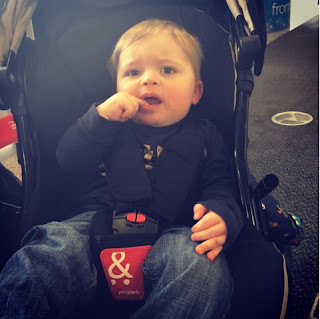 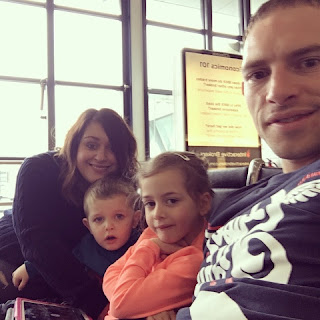 The train journey was pretty easy – we took sticker books, the iPad and food. We didn’t pay for seats for the boys, so we technically had three seats between 5 of us, but there wasn’t anyone sat in the seat next to Ell, so the older two both had a seat and we shared Mason between us, and eventually he fell asleep in the tula sling.
When we arrived at Marne-la-Vallee, which is the station right outside Disneyland Paris, we disembarked the train, and set up the double pushchair – beware if you have a pushchair, there only one lift up to the exit, and we waited nearly 25 minutes to get in it, as the majority of people visiting have pushchairs.
We checked in our cases at the Disney Express check in (get this, as they take your bags directly to your hotel, meaning you can go straight into the park).
Then we headed straight to the Disney Studios – we decided not to visit the Disneyland Park as we wanted the kids to have wow factor the next morning when seeing the castle!
We headed for the Toy Story area and all 5 of us had a ride on Slinky Dog. As everyone was quite tired, we decided to eat – we had a reservation at Bistro Chez Remy, the Ratatouille themed restaurant, at 4.30pm.
I can’t recommend this restaurant enough. The service was great, the theming was amazing, and the food was yummy. 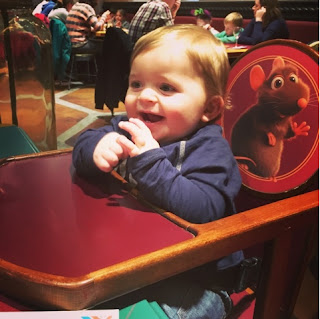 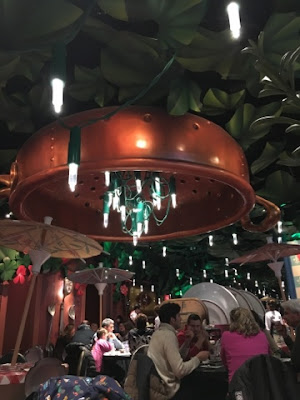 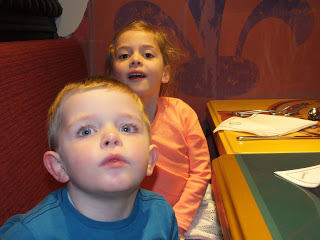 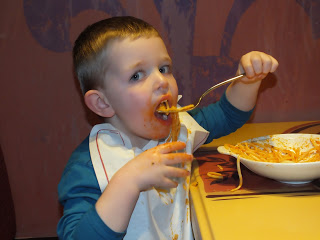 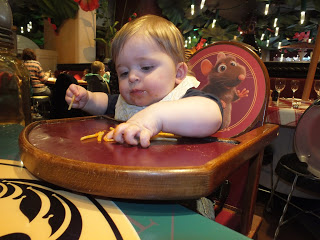 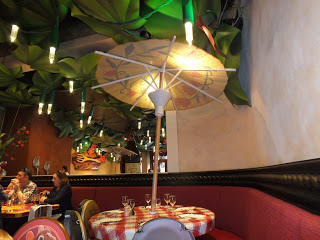 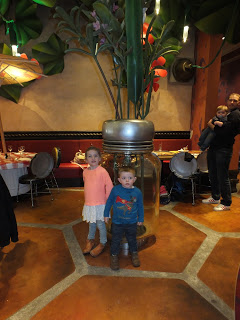 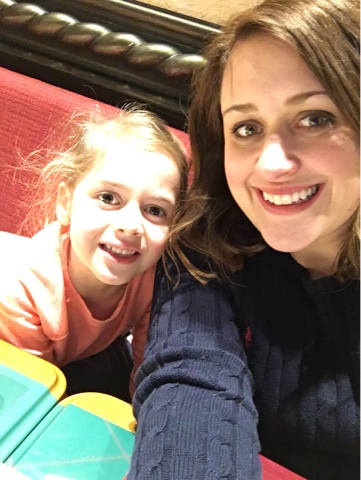 Ollie had a major tiredness meltdown when his food arrived. He insisted he hated pasta and refused to eat it. He stropped so much he fell asleep for 10 minutes on the bench seat, woke up and demolished the lot haha!

Everyone was quite exhausted by this point, so we walked back to our hotel – we stayed in the Sequoia Lodge which was about 10 minutes walk from the park (with the boys in the Phil and Teds and Izzie on Ell’s shoulders). We were really pleased with the room (which I took Zero photos of!) This is a file photo of the outside of the hotel. (credit: Disneyland Paris)

We had two double beds, (Izzie and Ollie shared) and a travel cot for Mason, a little dressing area with a big mirror, safe, fridge and sink and a bathroom with a toilet and a bath.
Once we had unpacked we went for a little wander to the Disney Village, to get our bearings,  and an autograph book and photo pass ready for the morning, and then back to the hotel as we had an early start in the morning for extra magic hours!