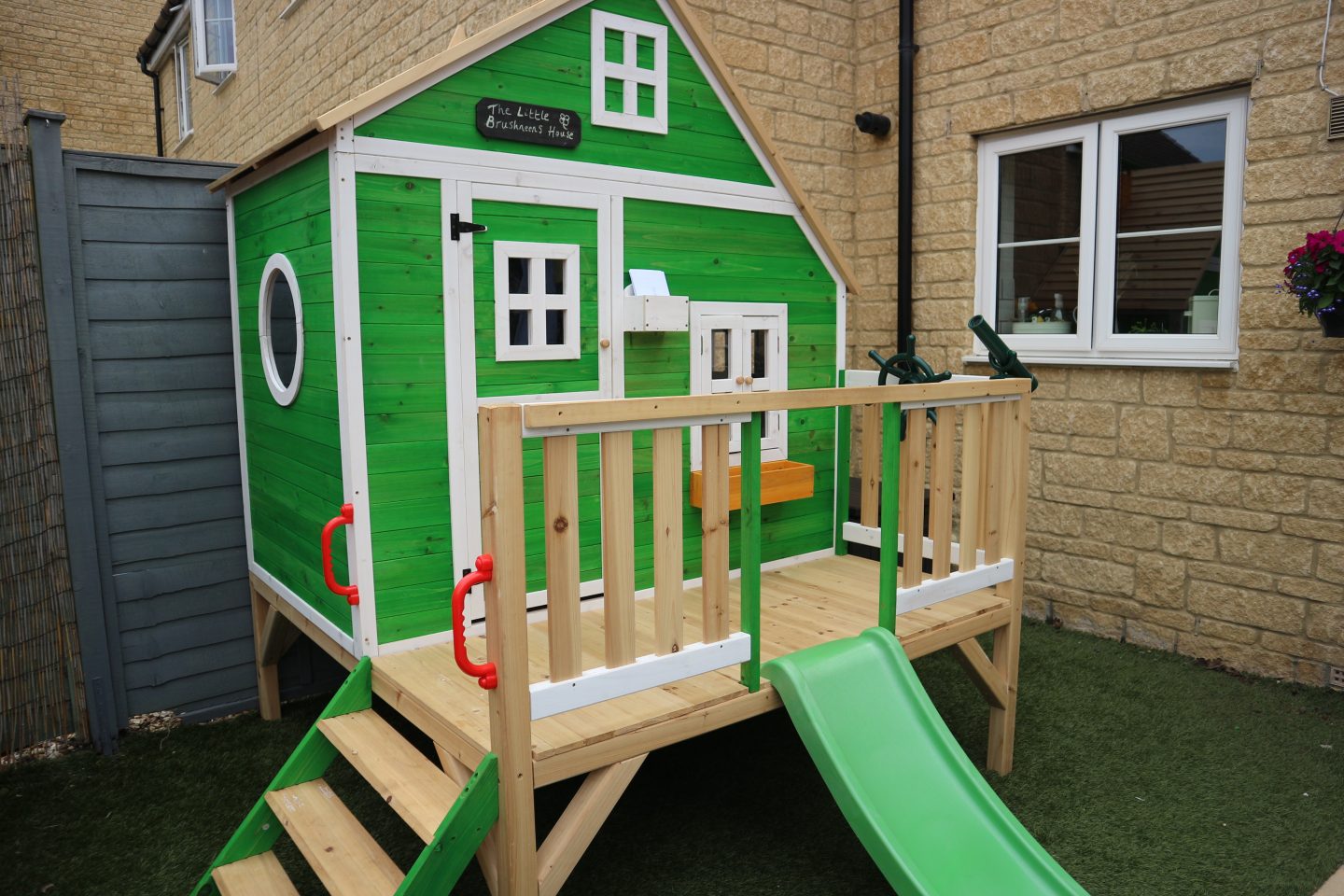 As a child I would’ve moved heaven and earth for a proper playhouse – I’ve always been a little homemaker at heart. Unfortunately I had to make do with my Dads shed – which in fairness he let us paint and rearrange until our hearts content – but I also had to share it with the firewood and a rogue mouse that used to chew up my ‘artwork’!

The one thing I adore about my kids is their imagination, but their constant efforts at making a den out of my sofa cushions started to take its toll. It became my mission to find them the perfect playhouse. My children range from 8 to 6 to 3 so it had to be a substantial size to be able to fit them all – plus it had to be sturdy and look reasonably attractive as we have a small garden.

This is where Big Game Hunters (aka The Play Experts) came in. They have a huge range of playhouses (and other outdoor toys) and after looking through their range I was torn between the Whacky Mansion (rrp £445) and the Whacky Penthouse (rrp £709). They are essentially the same playhouse (which comes in either red or green) but we went for the Penthouse as it had the added attraction of being on a tower base (meaning it wouldn’t flatten our artificial grass) and it had a slide. We also decided to add in a couple of extra features, such as the Ship Wheel, Telescope and Telephone – mainly as our three year old is pirate obsessed, and we knew it would only further their imaginative play. 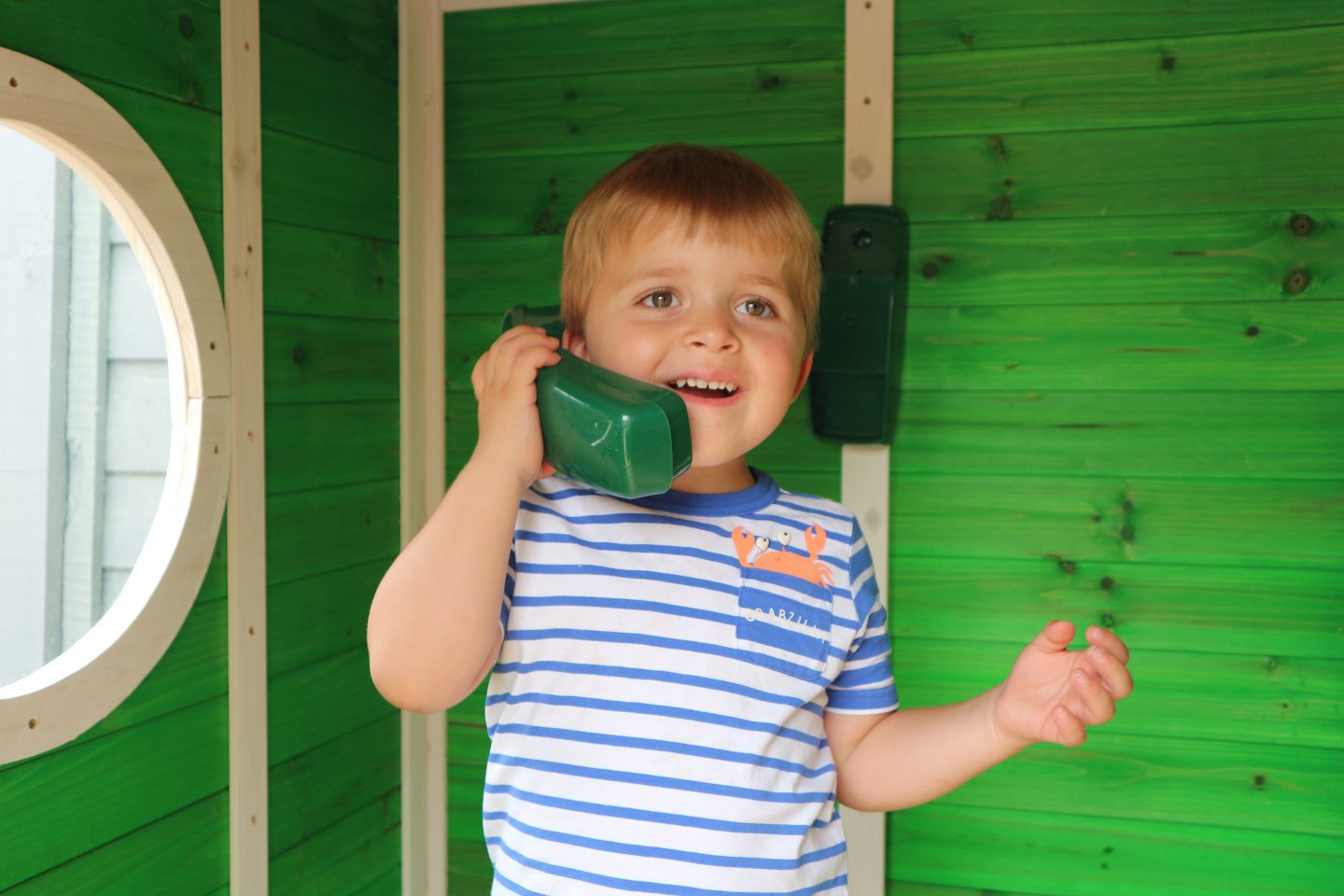 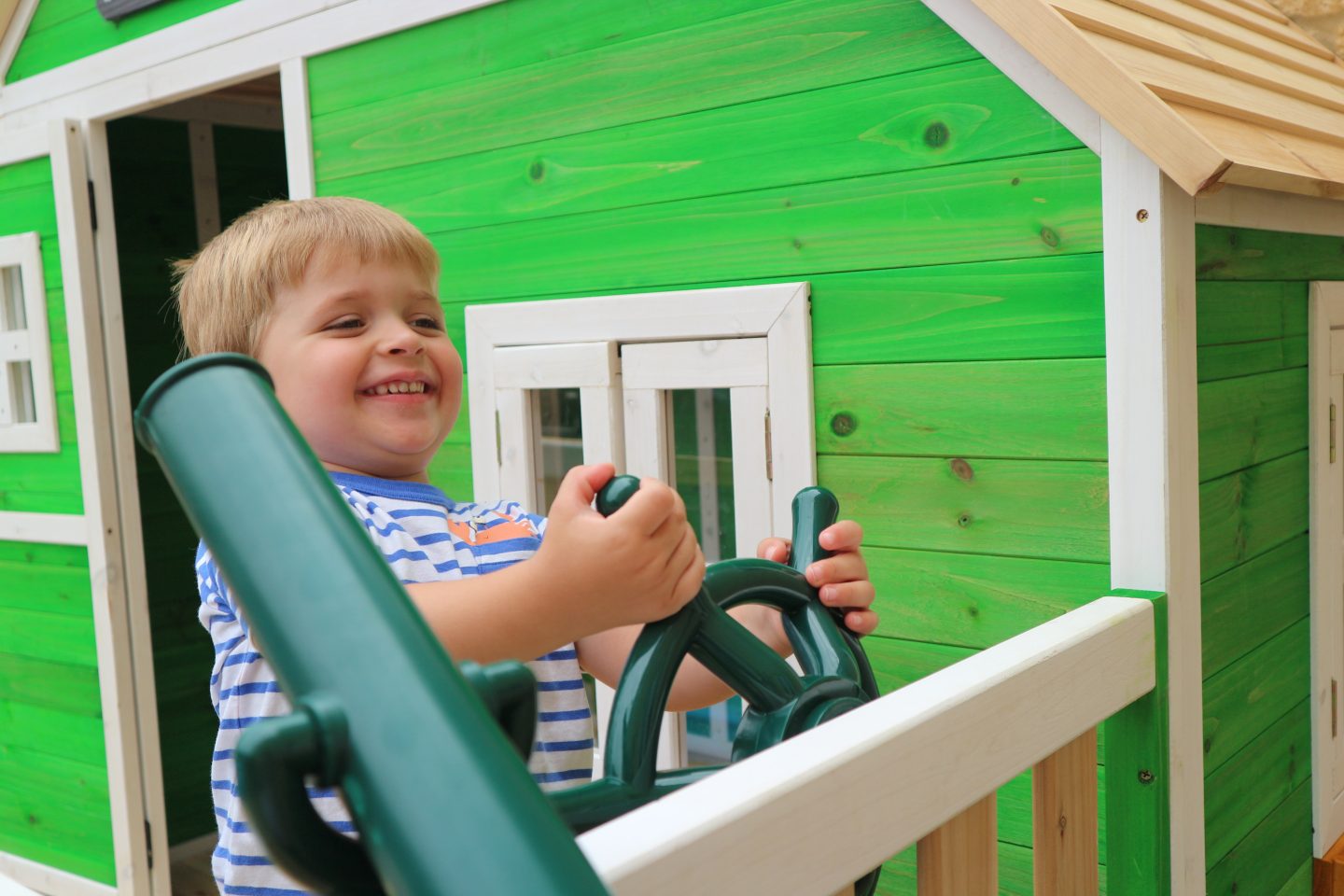 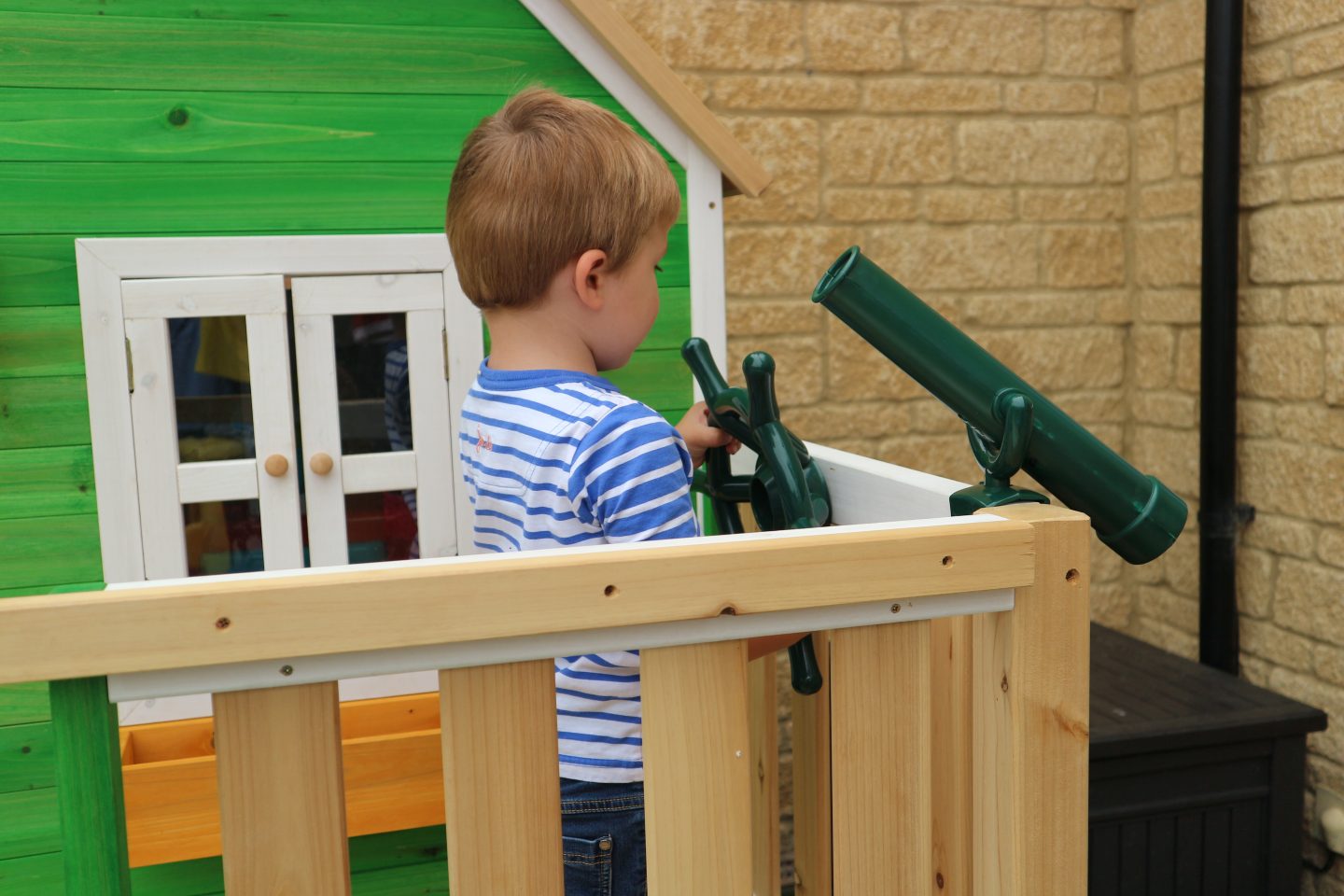 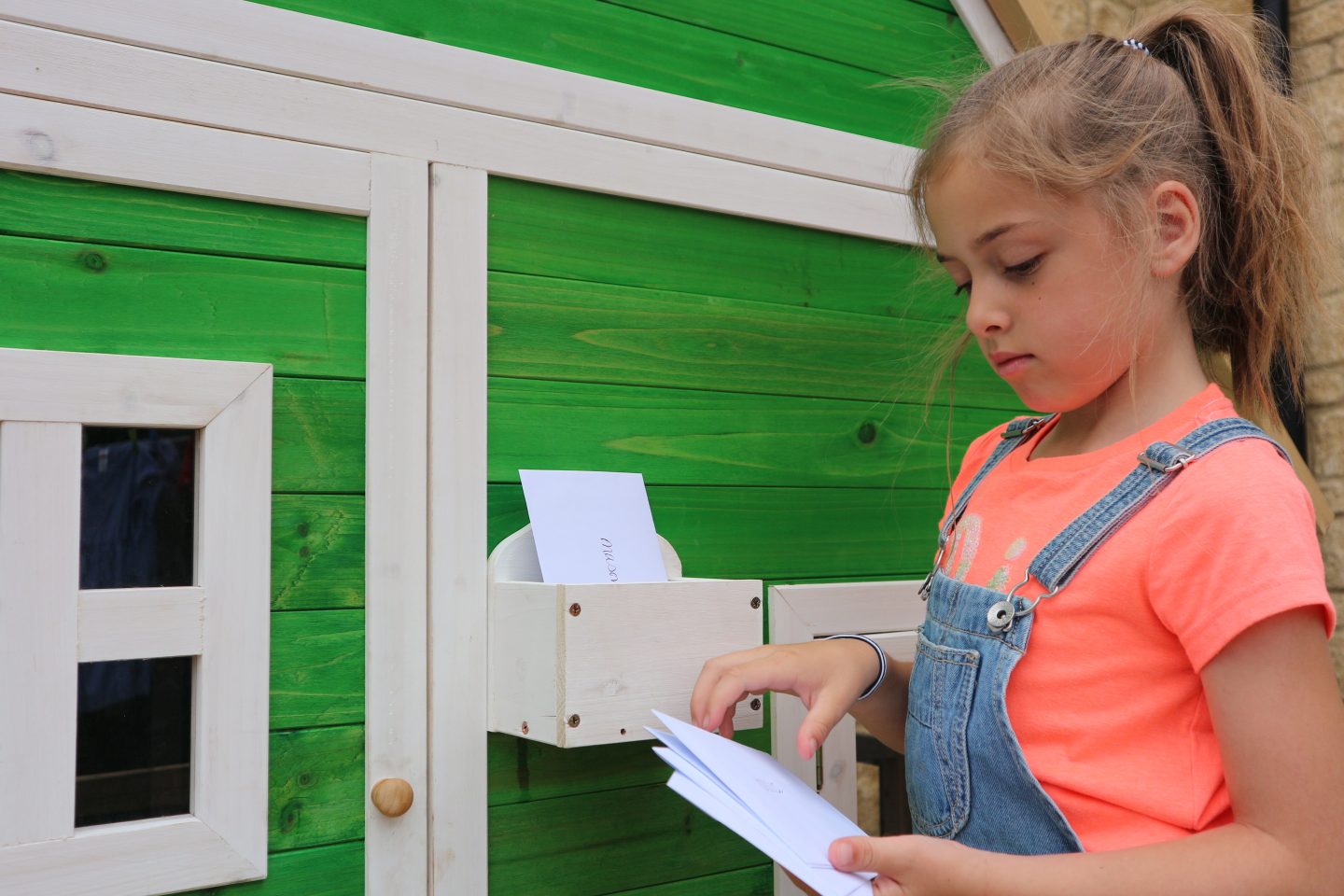 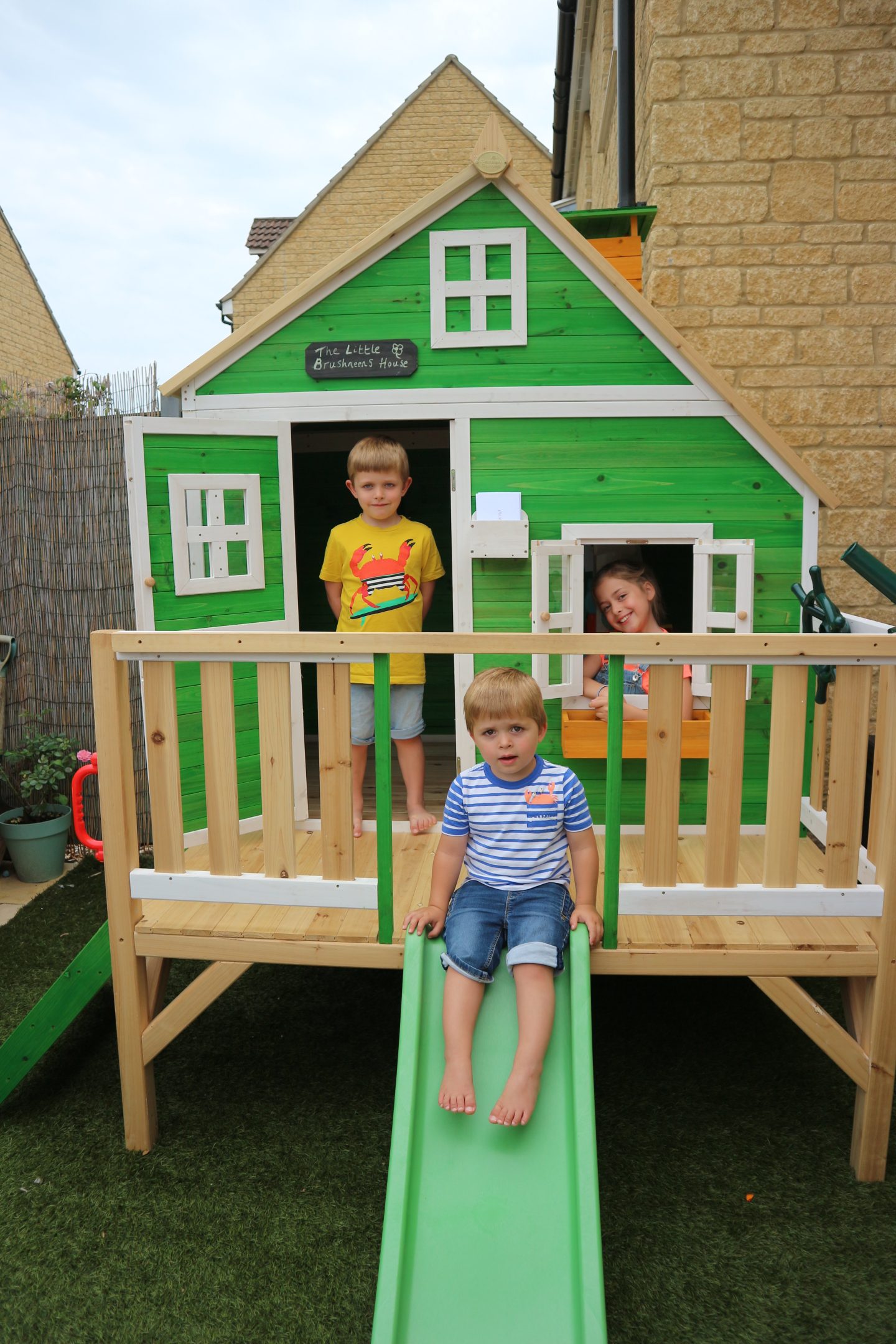 Once we had decided on what we wanted, the order was delivered the next day in 8, mostly huge boxes. Daddy was set to work putting it together – unfortunately being pregnant I wasn’t too much help, although he did have the help (hinderance) of the 3 year old. It took him around 2 and a half hours doing it mostly on his own. The instructions were pretty self explanatory once you worked out the numbers were for the parts and the letters were for the screws – all of which were clearly labelled. All the holes were pre drilled which made putting the right parts together a piece of cake. One thing I would note is that definitely would benefit from a drill or electric screwdriver to build the penthouse – using a manual screwdriver would’ve taken a lot longer.

All the parts are sturdy – the penthouse is made from Fir Wood, and smells amazing. It has a water based stain already on it, but we have decided we will also put a clear stain on it before the autumn comes as a preventative measure. I absolutely love the wooden steps (with notches to avoid slipping) and the lonely features. It is also painted inside which finishes it off perfectly.

The attention to detail is amazing – from the little pretend chimney on the roof to the window boxes. The kids love the porthole window and also the other two windows that fully open and close. It also came with a letterbox which has provided no end of ‘postman’ inspired fun. One of my favourite features has to be the little window boxes, which Izzie is planning on using to plant flower seeds in next Spring. The roof of the playhouse is over 170cm high which means I can even stand up in it – luckily as I seem to be constantly being made to go in and drink cups of pretend tea. 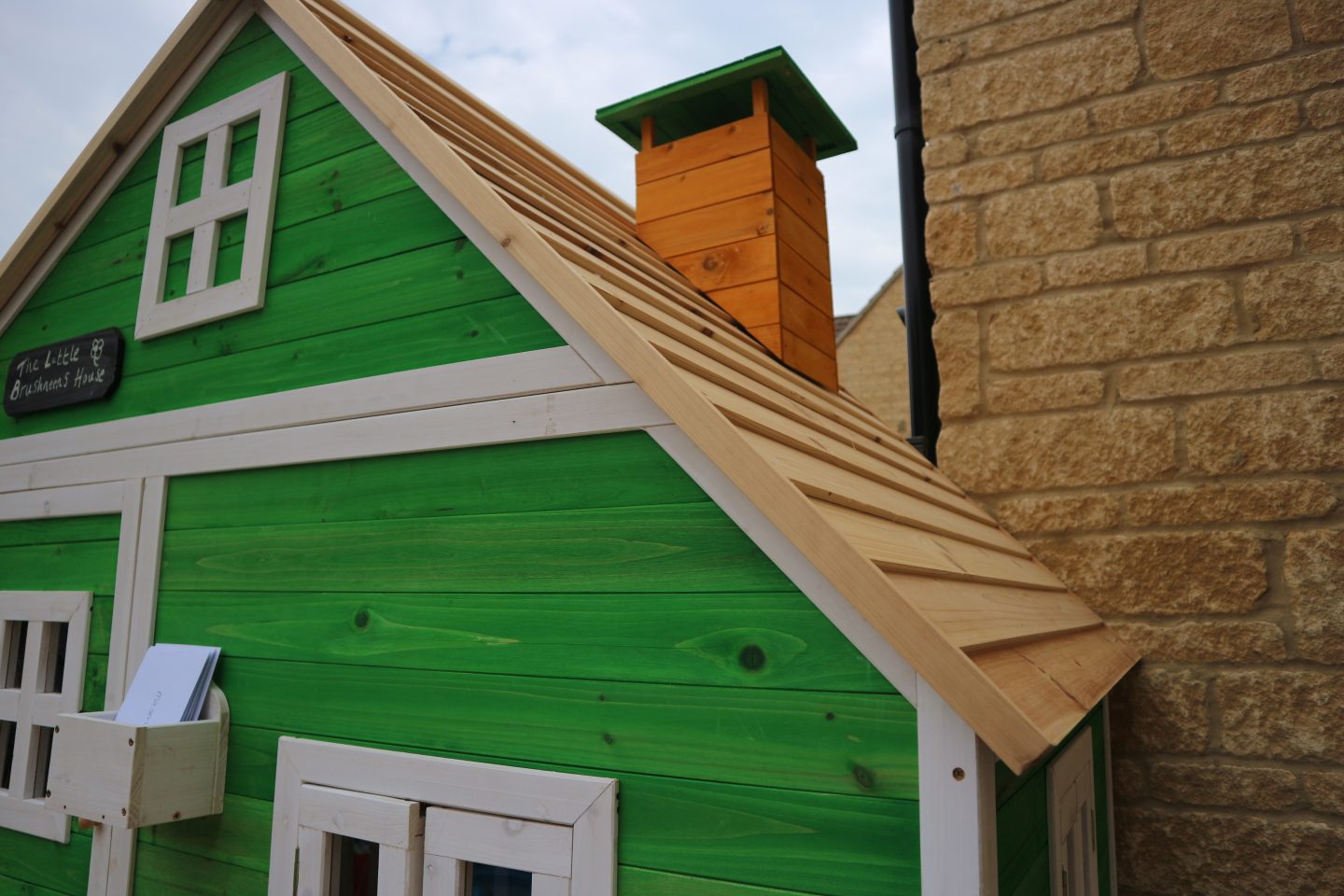 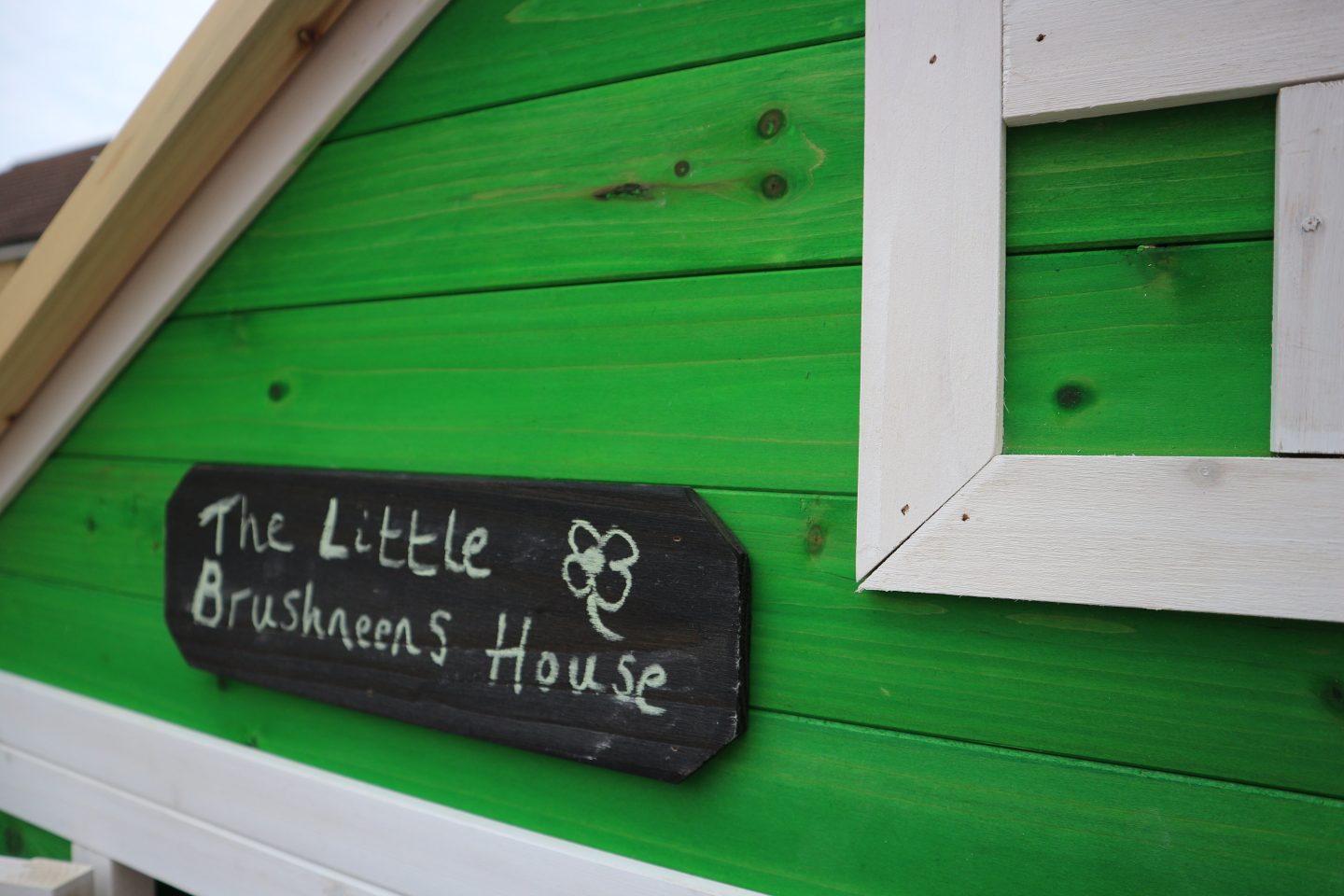 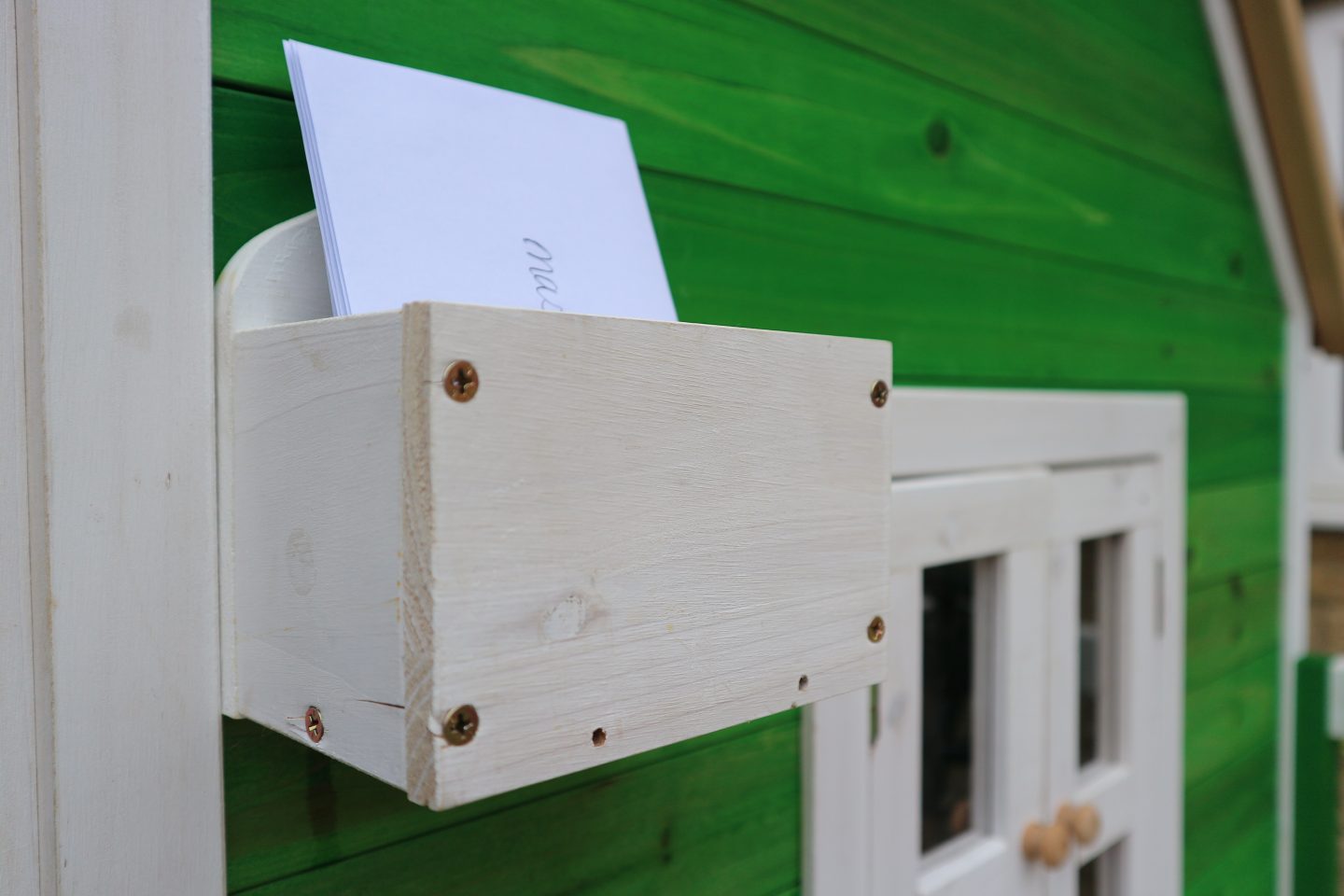 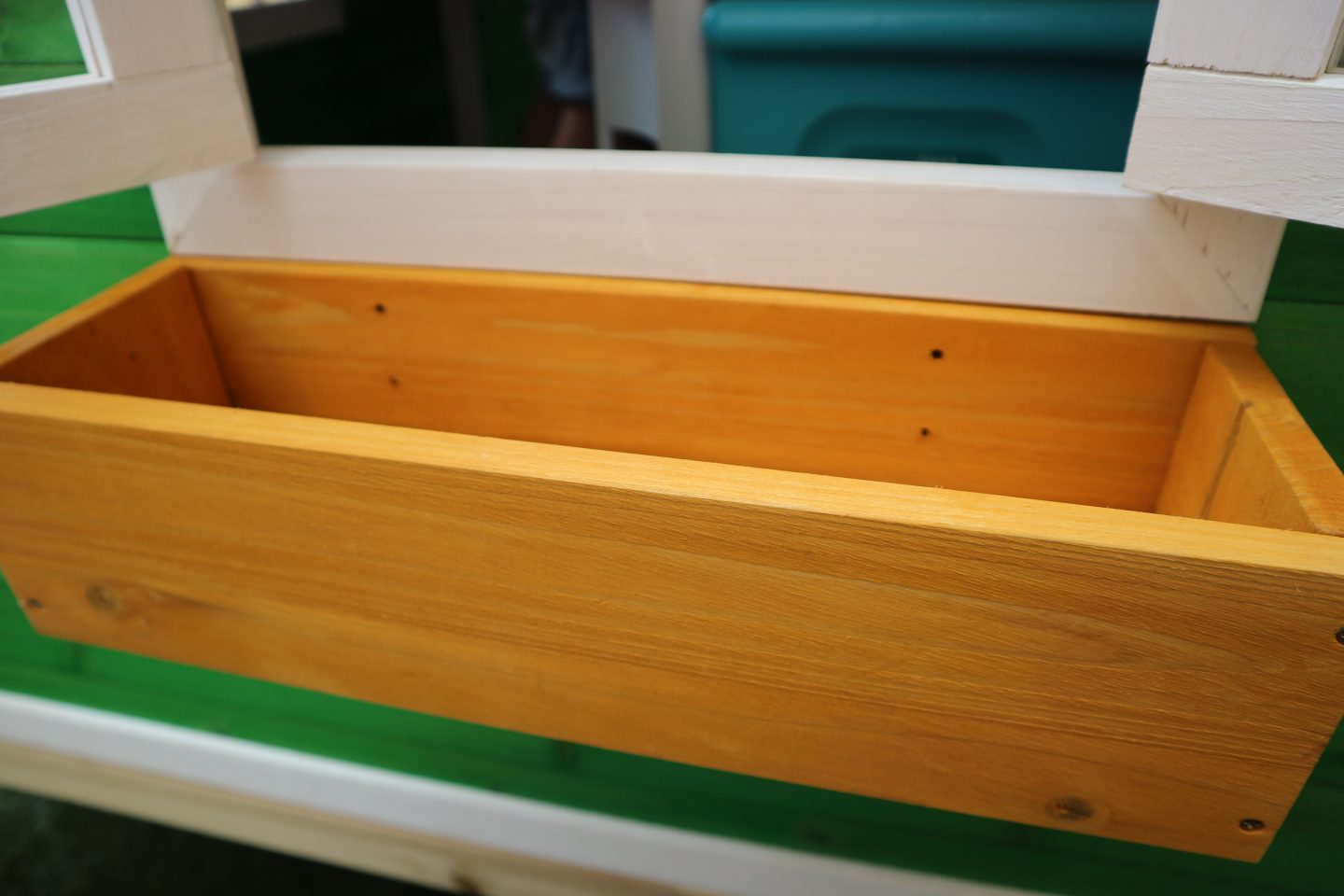 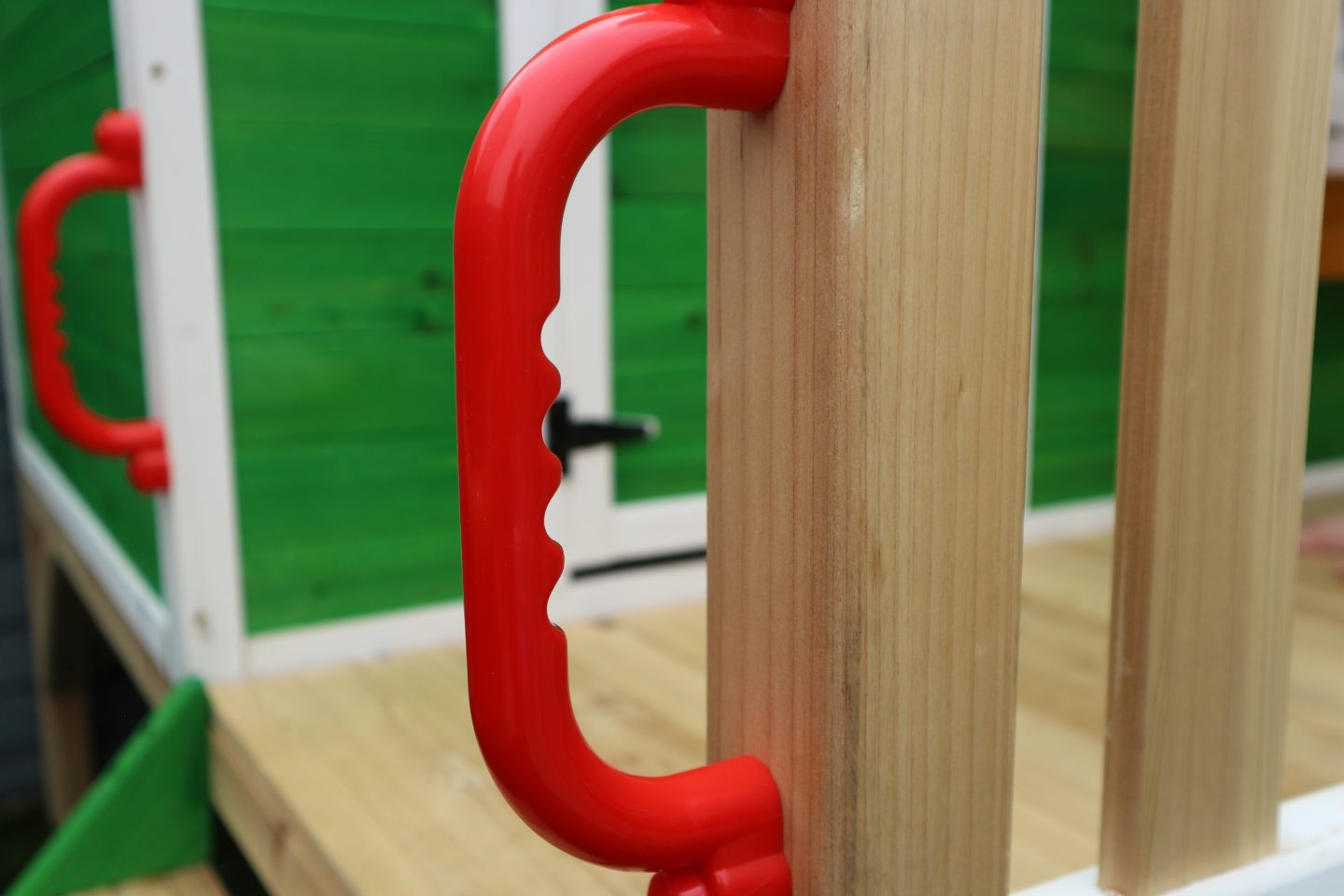 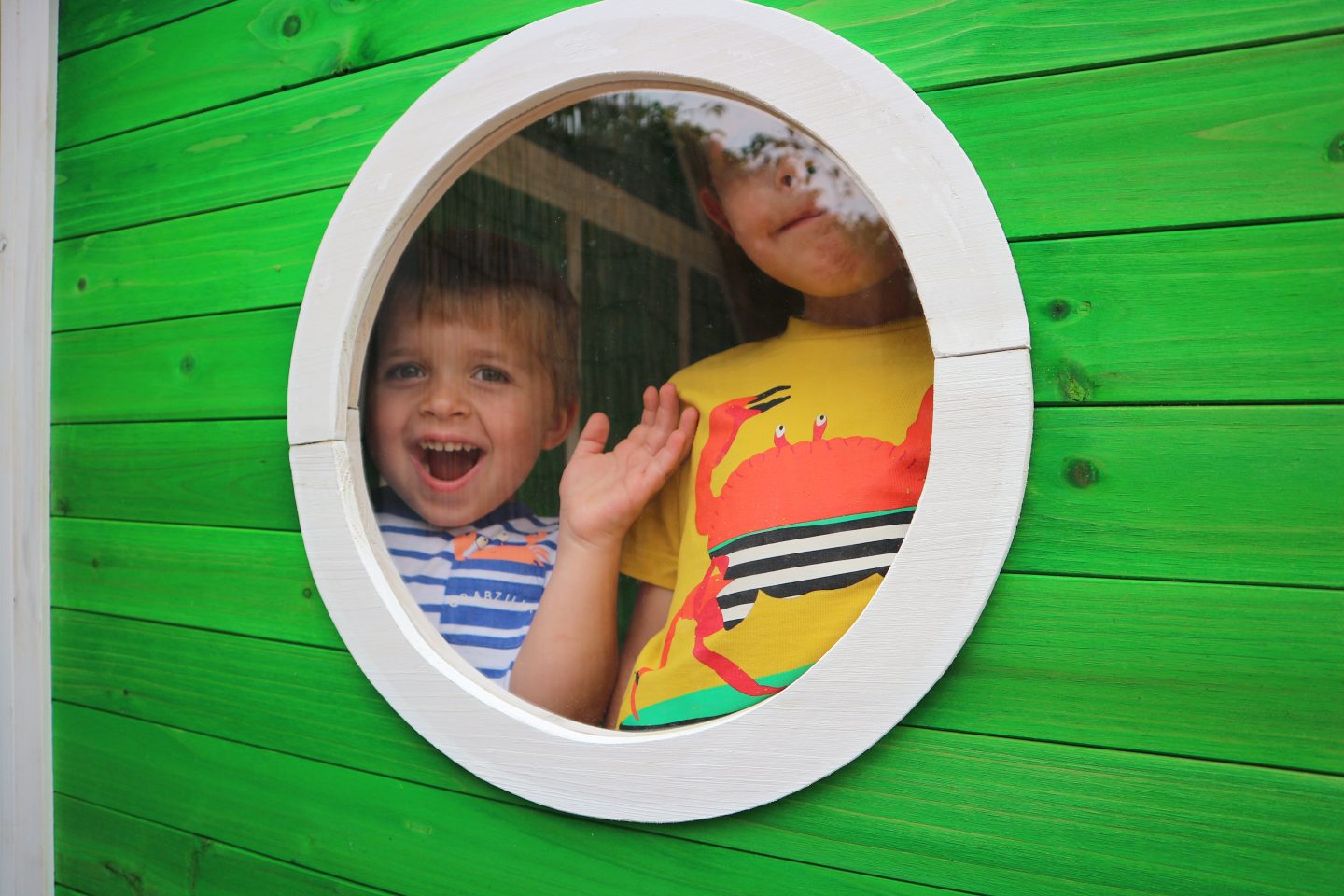 Inside the house we have put a play kitchen which the three year old loves, and there is still plenty of space for the older two to use it as a den.
So far the penthouse has been a cafe, a doctors clinic and most regularly a pirate ship – I think our neighbours must think we are a little mad as ‘ahoy mateys’ can often be heard. They also love the slide feature – I can see them having endless hours of fun in the summer holidays. 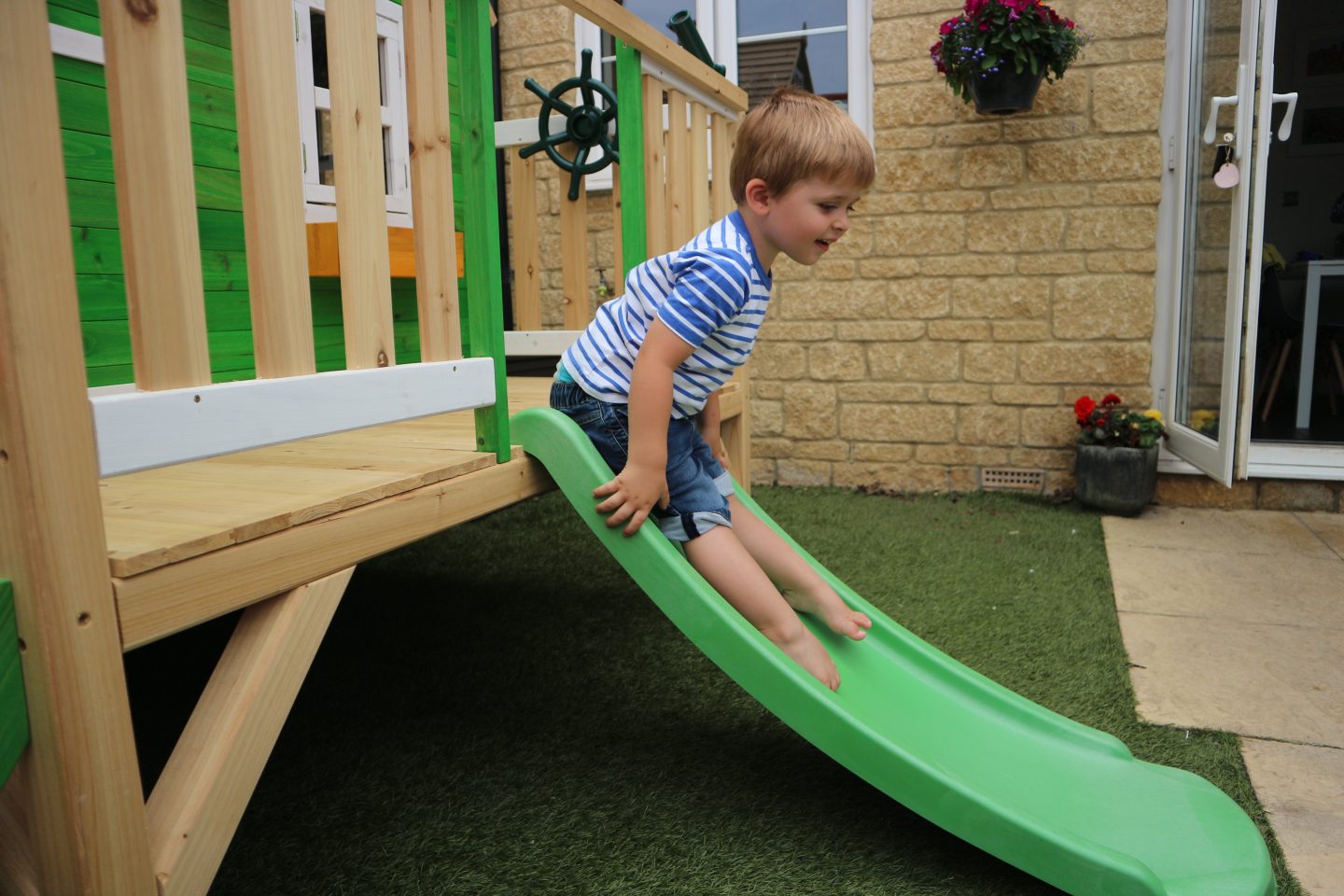 The Whacky Penthouse has been a perfect addition to our garden – it’s sturdy and has so far survived three monkeys swinging off of it, plus it has given them a space to use their imaginations to their full potential. I can wait to watch the many years of play that we get from the Whacky Penthouse – especially when this baby (currently cooking) is big enough to join in too. It really is the perfect playhouse. 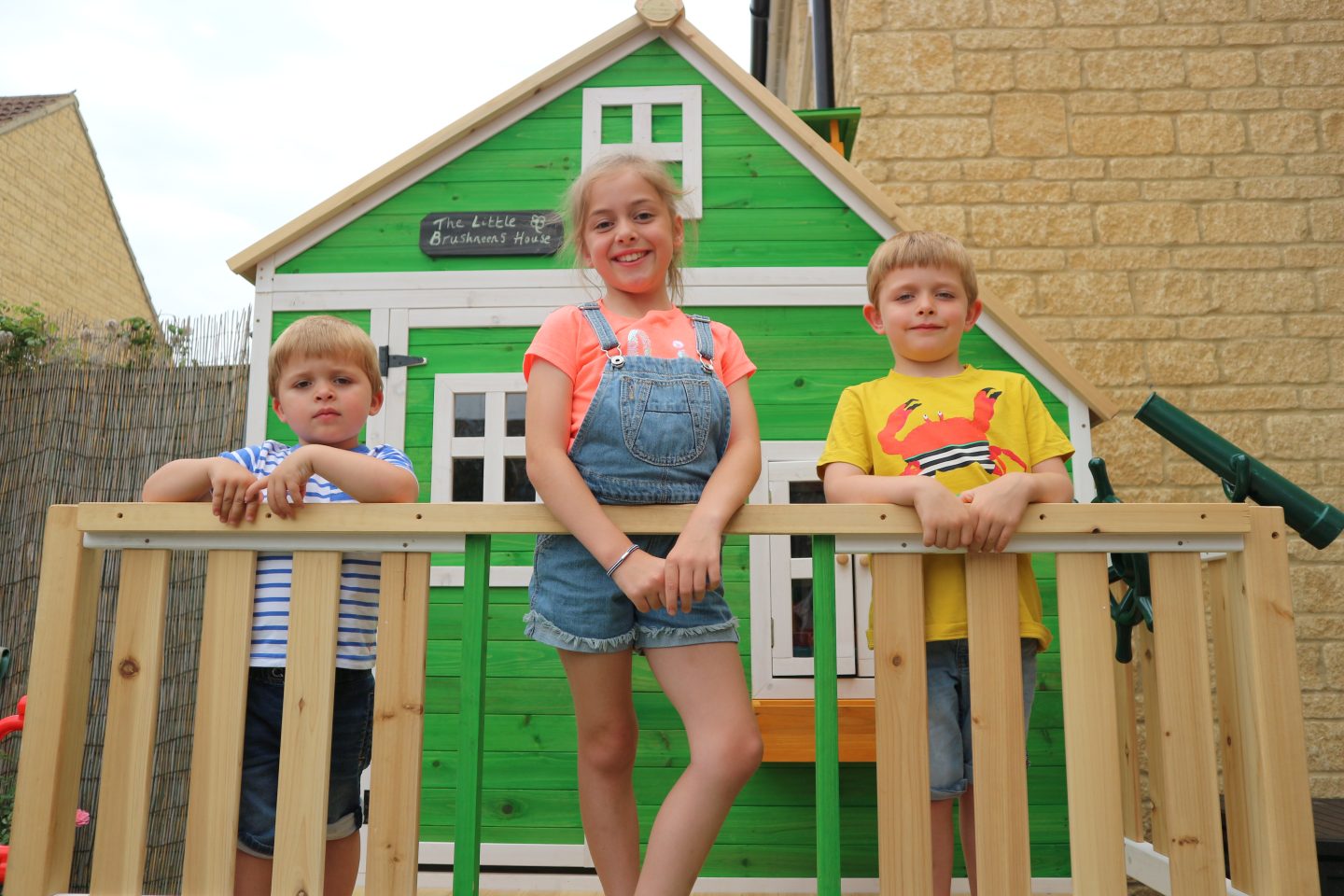 Disclaimer – we were provided with this playhouse for the purpose of this review but all photographs and opinions are as always my own.