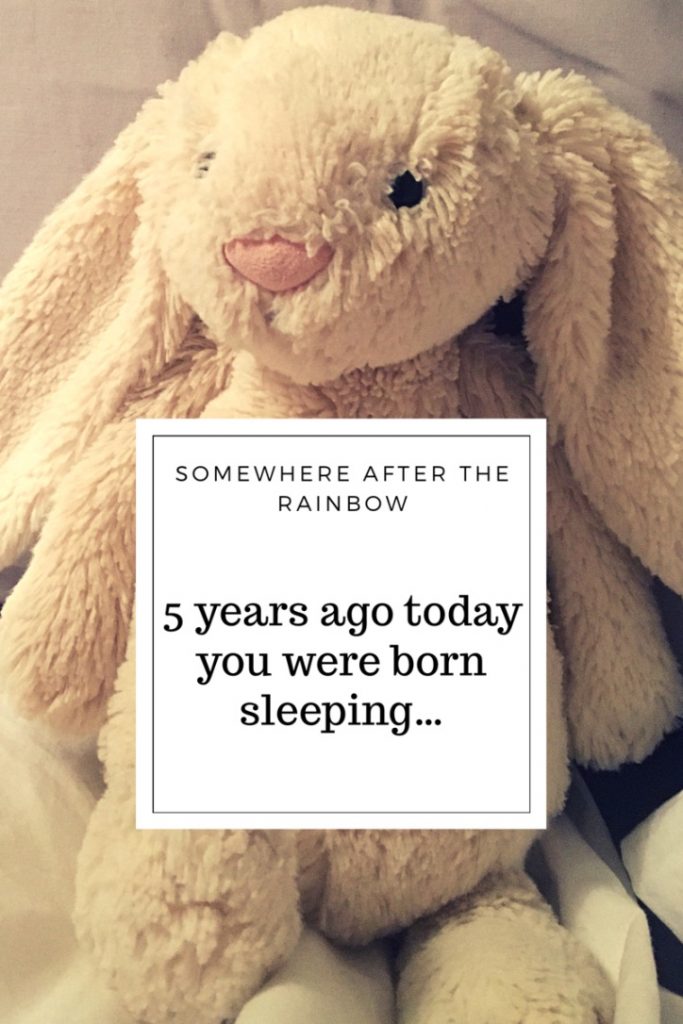 Today, February 1st 2017 marks 5 years since Sophie was born sleeping. I can shut my eyes and be back in that dark room in Stroud Maternity Hospital where the midwives told us our baby had no heartbeat, and it feels like 5 minutes ago, but so much has happened since, that it also feels like a lifetime.

Sophie was born after a quick and painful labour, just after midnight on Wednesday 1st February 2012. She never cried or took a breath. She had passed away possibly a few days before – we will never know exactly when. We found out she had no heartbeat on the Monday when I was 23+5. Because of this, regardless that she was born at 24 weeks, she was classed as a ‘late miscarriage’ and not a stillbirth.

If you have followed the press lately, you will know that ‘late miscarriage’ has been talked about a lot, following the recent Coronation Street Storyline, starring Kym Marsh and Simon Gregson, where their characters lost their baby at 23 weeks gestation.
You will also know if you have seen this, that because of Sophie’s death being a ‘late miscarriage’ we didn’t receive a birth or death certificate. Again, there has been a lot of press about this lately – my mum said there was a feature BBC breakfast the other morning. I’m so pleased that the issue of no birth certificates for babies born before 24 weeks is being discussed, but it has also come at a difficult time for me, bringing up emotions, and I have to say, this month I have really struggled. I fully that support parents whose babies have been born sleeping before 24 weeks being able to have a birth certificate if they so choose, but please, just because you have seen it happen on a soap, don’t think you know what we went through. Don’t think you understand how this feels.

January and February are always hard months for me, and they always will be.

I feel like 5 years on I have found this year harder than ever.

I mainly feel guilty in all honesty.

I feel guilty that we didn’t push harder for her birth to be classed as a stillbirth – because she was actually born on the day I would’ve turned 24 weeks, we should’ve pushed for it. We would’ve had a birth certificate and a death certificate and a funeral, and Sophie would have ‘officially existed’. Writing that seems wrong, as we know she existed, I felt her kick, we heard her heartbeat. We decorated her nursery. She existed. But there is no piece of paper to say so. No grave. Her name is written in a book of remembrance at a crematorium in Swindon, which is opened every year on the day she was born. I don’t even know where her ashes were scattered.

I can’t even begin to explain how guilty I feel over this. At the time we weren’t really given many options. It was cut and dried really that she would have a postmortem and then be cremated. I didn’t know that we could have a funeral. A grave. We didn’t question anything really, we were in shock. Our way of dealing with losing her was to try to have a sense of normal for Izzie and get on with our lives and I then fell pregnant with Ollie very soon after, so I had a distraction – I had another pregnancy I had to focus my energy into – I was going to bring this baby home.

Another thing I feel guilty about is that we were offered a memory box when we left the hospital. The hospital took photos of Sophie. We didn’t see or hold Sophie, because as I mentioned earlier, she had passed away some time before and because I was scared to see her, the midwives respected our wishes and agreed that it was probably for the best. I remember words such as ‘very purple’, ‘very very tiny’ ‘large hands and feet’. We were later told that she weighed less than a pound and was significantly too small for her gestational age. In short she had stopped growing sometime between our 20 week scan, and us finding out she had gone.

To this day I believe not seeing her was the right decision, but I do wonder if they had taken photos of her hands and feet, or if they had done hand and foot prints for us. I think it would be nice to have something that we could show the kids, so they know their sister was a baby, not just a story we remind them of from time to time. We talk about her but they are really too young to understand. They are lucky enough they haven’t known death yet and I don’t want them to. Let them keep their innocence. This world can be awful, and I want to protect them for as long as I can. Izzie wasn’t even two when we lost Sophie and she was too young to remember. When writing this post, I realised I had no pictures to add, which made me feel sad, because anyone who reads my blog knows how laden with photos of the kids my posts normally are. Instead, I have a photo of the toy that we bought when we found out we were pregnant with Sophie.

For a long time, we didn’t even speak her name. It hurt me too much. Only in the last couple of years have we told people her name, and spoken about her regularly. I wonder if people think I’m hard, as now I can tell her story without emotion. It becomes easier – it never leaves you but time is a great healer as they say. The September just gone, Sophie would’ve started school – that was hard for me. Hitting milestones always is, and as much as I adore my boys, I often wonder what it would’ve been like to have two girls. I desperately wanted a sister growing up, and I feel guilty that I’ve deprived Izzie of that. Izzie has the toy rabbit in the photo above, that we had bought for Sophie on her bed. She knows it was Sophie’s rabbit. She sometimes tells people ‘this was my sisters but she died before she was born’.

I feel guilty because when people ask how many kids I have, I say three. One of my social media hashtags is #mummyofthree. I know I have four, I have had four pregnancies, and four labours, but only three babies came home. If I say I have four children, I have to explain why there are only three with me, in my photos. No matter how ok I am with talking about Sophie, other people often aren’t. You can see the look come over their faces, as they try to excuse themselves from the conversation. This doesn’t always happen – I know a lot of lovely mummies that have been amazing when I’ve told them our story and have been wonderfully supportive.

Also I often find people are surprised when I tell them about Sophie. I think they think because I’m a naturally happy smiley person, that there no way we could’ve gone through a loss like we did and come out the other side. I then feel guilty about that too, but I figure I am so grateful to have the beautiful children that I do have. I was so incredibly lucky and blessed to already have Izzie who is now nearly 7, and to go on to have easy pregnancies with both of my Rainbow babies, Ollie, who turned 4 in December and Mason who will be 2 in May.

I am so grateful for my babies – they may drive me insane at times but I wouldn’t change them for the world. As I’ve said before, if we hadn’t lost Sophie, we wouldn’t have Ollie – I can’t imagine our family without him.  We have so much to be thankful for. Losing Sophie made us rock solid as a couple and as a family. It made us grow up (ridiculous really as before we lost her we already had a toddler and had been married for nearly three years). We changed in only the way that you can after losing a child. It was our new normal.

It also brought me here, where I am today, writing this blog post.

If reading this can help someone else understand their feelings after losing a baby, I’ve done my job.

If it makes one grieving parent feel less isolated, perhaps you are at the beginning of your baby loss journey and it feels as if your heart is breaking, that your arms are empty. You are not alone. I also hope that this post has made you realise it is ok to be happy, it doesn’t mean you are forgetting your baby, or moving on. I hope that me sharing my feelings – my guilt, my sadness and my happiness – has helped in some way.

It’s the least I can do in Sophie’s Memory.