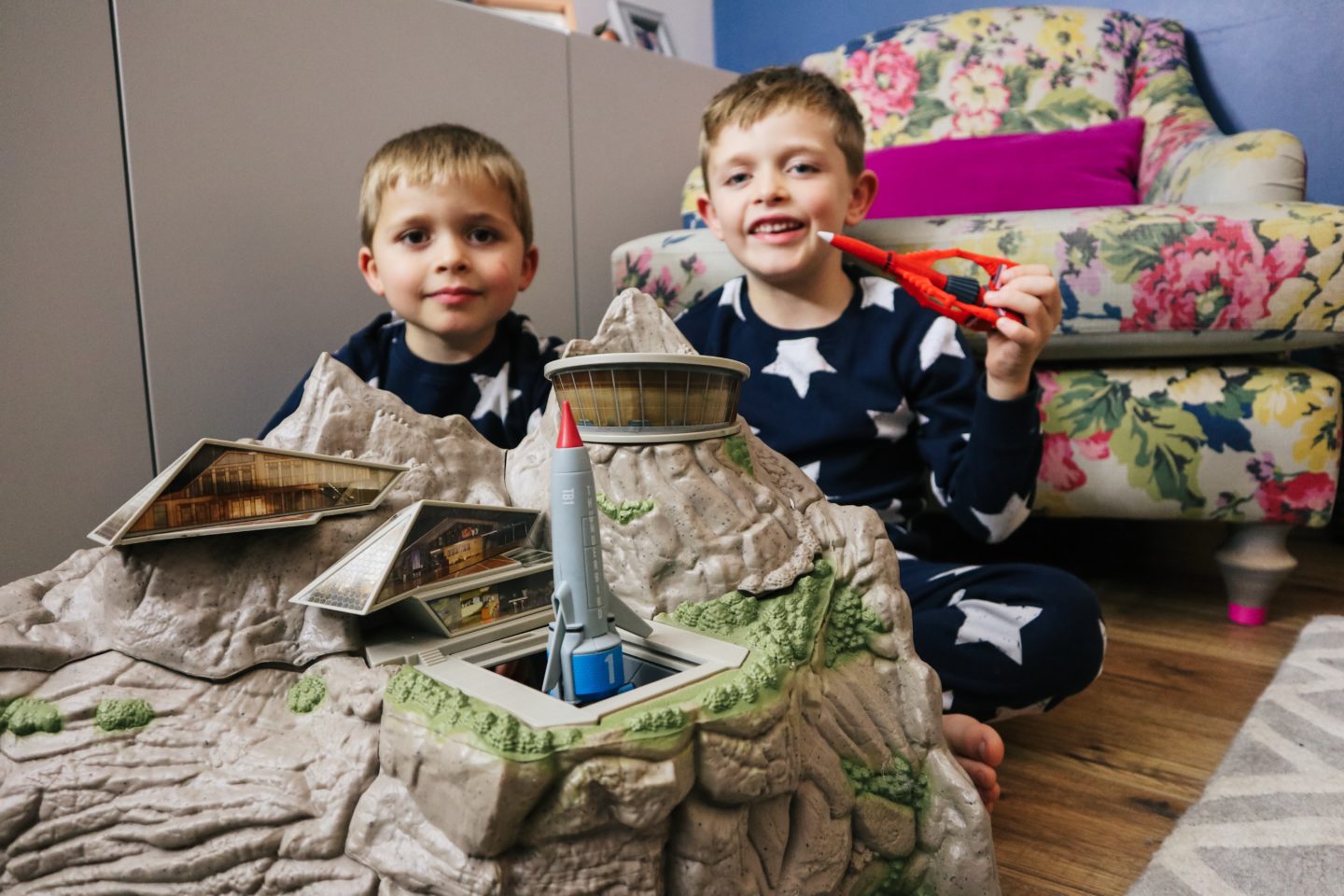 As a child I remember watching old episodes of Thunderbirds (the original ones with the puppets) with my Dad. A couple of years ago, when Thunderbirds relaunched on ITV Ollie who was nearly four at the time was obsessed with it – I had to drag him away from it every morning so I could get him to preschool on time.

For his 4th Birthday, he had a Thunderbirds themed party and of course got Tracey Island and all the vehicles. I remember one of my best friends as a child had an original Tracey Island and I loved playing with it, loving how the pool moved back so that Thunderbird 1 could launch.

Nearly 3 years on Thunderbirds have just launched a new series on CITV, along with a new range of toys by Bandai. With the Thunderbirds love still being big in the Brushneen house, the boys were very excited to receive some of the new toys to try out.

Side note: I *may* have confessed once to my husband that if I had to marry a cartoon character, it would be Virgil Tracey (new version not the puppet), so I also wasn’t complaining at what was sent!

The boys loved playing with these action figures. They both have a button that makes them talk and light up. The mechanic has a bullet shooter on his shoulder, and Virgil has a working ‘grabber’. These were a massive hit.

We had a couple of these with our Tracey Island but we’ve managed to misplace Thunderbirds 2 & 3, so the boys were excited to be sent TB 3 as part of this review. The vehicles are very detailed and have moving parts. They also have ‘motion tech’ which means as you move them they react. Obviously as we have Tracey Island the boys loved launching them through the hatches – and Ollie has added a new TB 2 to his Christmas list.

Finally we were sent a Thunderbird 2 Rescue Mission Vehicle (RRP £19.99), which was the biggest hit of all. It comes with a Virgil Tracey figurine and lights up, makes sounds and the boys favourite part – it has a ‘grappling hook’ and can be used as a zip line for Virgil.

The toys are wonderful quality (although I do have to say our Tracey Island does fall apart more than it’s together – the toys definitely don’t do this), and have already provided hours of fun for Mason and Ollie.

You can check out the new series of Thunderbirds on ITV/CITV and the toys can be found on sale now.

We were kindly sent the Thunderbirds toys in exchange for an honest review. All opinions and photos are as always my own.